Indication of the origin of meat, the farming systems of the Chianina breed, the meat aging period and slaughter quality: these are all factors that must be taken into consideration when buying prime-quality steaks. Let’s see which meat cuts are the best for grilling as well as the characteristics of the Chianina breed.

Let’s start by giving some useful definitions: a T-bone steak is a bone-in steak including the fillet; English people called it T-bone because of its T shape, cut from the short loin. Another similar beef cut exists, which also bears an English name: the porterhouse steak.

Then there is the rib eye steak - the classic bone-in steak, cut from the neck and fore rib. We suggest searing it on the grill and eating it as tagliata, a sliced steak. Unlike the Florentine steak, the rib eye steak does not include the fillet, it can be well-cooked because it is thinner and it doesn’t need to be grilled on a fire, but can be cooked on a hotplate.

Why is it called bistecca?

Although this dish is very close to our heart and our culture, the steak actually has English origins and is very popular in many parts of the USA. Pellegrino Artusi talks about the origin of steak in the recipe number 556 “Florentine Steak” in his book “Science in the kitchen and the art of eating well”: “The English word beefsteak means rib steak. This is the origin of the word “bistecca”, which is simply a steak with the bone left in, about a finger or a finger and a half thick, cut from the loin of a young animal”.

Pellegrino underlines the distinction between the fillet and the steak, two very different cuts; funnily enough, back in the day the former was considered a less refined cut than the latter. Artusi thinks that in order to achieve the perfect steak, one needs a flaming hot grill and the meat should be seasoned only after it’s done cooking. It is essential that  “juice spurts out abundantly” from the steak, when you cut it.

What do we call a Florentine steak? It is an extremely refined meat cut which should meet specific requirements: a Florentine steak must be at least 6 cm thick and weigh at least one kilo. As we have already mentioned, the name steak has English roots, but the steak itself has become a traditional dish in Florence, admitting very little variations.

The name itself reveals that this dish is deeply tied to the city of Florence; it was first mentioned back in the days of Lorenzo de’ Medici, when steaks were cooked on big bonfires on the night of 10th of August, celebrating Saint Lawrence.

The golden rules for a perfect Florentine steak

Meat should be cooked at room temperature, so if you buy one of our amazing steaks, remember to take them out of the fridge well before you cook them and leave them to rest for at least three hours.

Before placing it on the grill, the meat must be dried up; this is because the humidity could lower the grill temperature and thus jeopardise the cooking performance. ​​​​​The meat should only be salted or seasoned with coarse salt, once it’s done cooking.

Then you need plenty of firewood embers; it would be such a shame to cook the steak on an electric grill or in a skillet. The Florentine steak requires fire! This is especially important in the first minutes, when the Maillard reaction starts occurring: it is a sort of caramelisation process allowing the meat juices to remain locked inside the meat (do you remember the juices spurting out of Pellegrino Artusi’s steaks?).

Florentine steaks should be flipped only once, using pliers and not a big fork which would pierce the crust, and then it should be placed upwards to finish cooking. For what concerns cooking times, people have very different opinions on the matter, which we are not going to dwell on; what is certain is that the Florentine steak should be cooked rare. 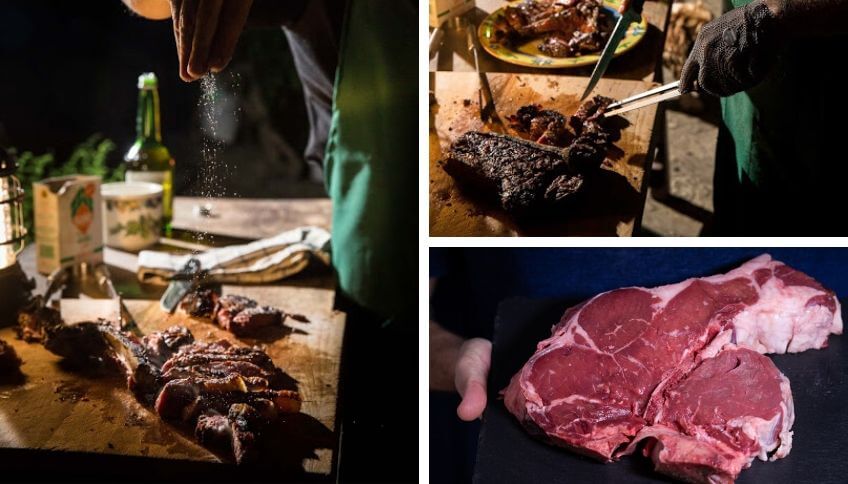 The story of the Chianina breed dates back over two thousand years ago, well before Pellegrino Artusi. The name Chianina comes from the valley - the Chiana Valley - where this local breed is farmed. The breed as it is today is the result of the commitment of professor Ezio Marchi who, in the middle of the 19th century, worked on a genetic improvement of the breed, by carrying out several selections according to precise and strict scientific methods.

The result is a refined cattle breed with a mild personality, an imposing but at the same time harmonious appearance  and a pure white coat: a gentle giant, the “gentle giant from the Chiana Valley”. It is a renowned cattle breed because, besides its incredible story and beauty, it meat is extremely delicious.

Several meat cuts are made from the Chianina beef, but steaks are undoubtedly the most famous ones which best enhance the meat quality as well as the beauty of this majestic animal; that is why this particular breed has become so deeply tied with the Florentine steaks.

This breed has another quality: Chianina cattle are not suitable for intensive animal farming methods. This means that the meat has exceptional sensory qualities, since animals are only slaughtered when they have reached a specific weight and hence optimum fat cover.

In some farms you can see Chianina cattle happily graze grass and tree leaves - which they can reach because they are very tall. However, it is important to mention that in Tuscany these cattle are more often farmed in cattle sheds, always in good farming environments though, where cows are only fed with selected feeds and live according to hygienic standards. That is why their meat is so refined.