“Canederli” dumplings are the dish that best represents Trentino Alto Adige’s cuisine. There are a thousand types, with speck, “Luganega” sausage, herbs, mushrooms or nettles and each family prepares them according to a recipe that passes from generation to generation.

The influences of Central European cuisine which have marked the area’s whole culinary tradition are particularly evident in this recipe. The Austrian, Swiss, German, Polish and Hungarian knödels are nothing more than the brothers of our ”Canederli” from Trentino, with which they share tastes and origin.

Speaking of origin, do you know how these dumplings were born? The fact they are essentially a peasant dish, born of the need not to waste anything, only confirms my theory of need and ingenuity.

The peasants recycled the leftovers with what they had available. Bread was not lacking, but it was never wasted. The dry one was reused and turned into a new dish.

It really wasn’t anything original, do you remember the “Pappa al pomodoro”, the “Panzanella”, the “Ribollita”, the “Pancotto”, the “Valdostana” soup and many more preparations, one more delicious than the other, born from recycling?

Bread is the main ingredient, but it is the skillful balancing to create the perfect mix. All the other ingredients were simply products that the farmers had at their disposal without even leaving home.

Their hens’ eggs, their cows’ milk, the herbs of the field, the speck or “Luganega” sausage, when the pig was butchered for the holidays.

The main ingredients, in good times, were at hand. Other than that, they would make the best of it with their technique, dexterity, ingenuity and the combination of flavours and aromas.

It is not enough to say that “Canederli” are an historic dish. We know for sure that they have been eaten in Trentino for at least 900 years, since the first depiction that arrived to us dates back to 1180.

In Castle of Sant'Appiano’s chapel, in fact, there is a fresco that leaves no room for doubt. Next to the Virgin we find the portrait of a woman, probably a cook, who cooks 5 big patties in a saucepan, very similar to the current dumplings.

The funny thing? The lady of the fresco not only prepares them, but also tastes them! Hence the name with which she went down in history, the Knödelesserin, the “Canederli” eater. 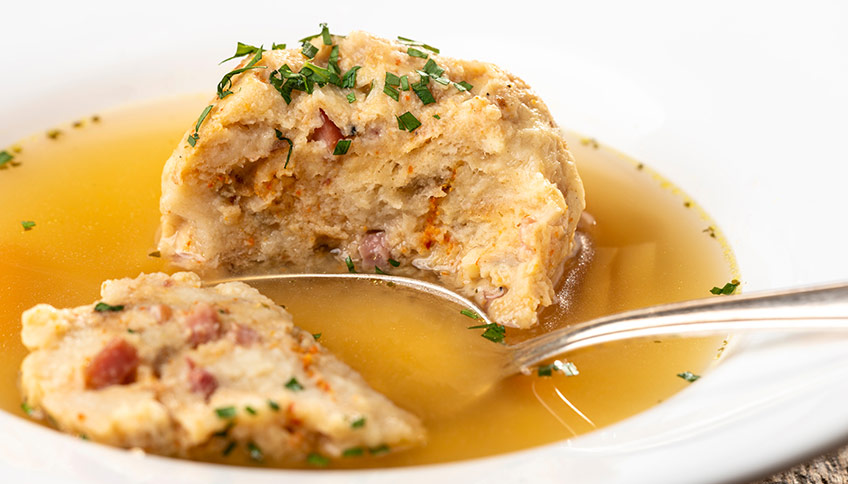 They’re the most typical dumplings of the Trentino tradition. They were once eaten only for the holidays, especially because the salami hardly abounded on the farmers’ tables.

In the authentic "Canederli" from Trentino you’re supposed to see and taste the speck and the dough must be rough, firm but soft.

Did you know that you should never cut a dumpling with a knife? It would be a real affront to those who prepared it, because it would mean that it’s too hard and spongy.

The best recipe for dumplings. They are cooked in meat broth and served very hot, perhaps with a nice sprinkling of cheese.

There are also those who say that the real “Canederli” are only those in broth, but why limit yourself when it come sto goodness? In fact, we also recommend them with…

Are we up in the mountains or not? So why not combine these two excellences of the territory in a dish that is a real explosion of the scents of the forest?

Porcini mushrooms, of course, but also chanterelles, honey or red pine mushrooms, and if we are out of season you will see that even dried mushrooms – as long as they’re of excellent quality  – will work perfectly for a super tasty sauce to go with our "Canederli" from Trentino.

"Canederli" with spinach and herbs

That’s right, “Canederli” can also be vegetarian. And it’s not surprising, since they started out as a peasant dish.

A super classic but timeless recipe. Even better if you get high mountain artisan alpine butter.

Serve them very hot, with a generous sprinkling of Parmigiano Reggiano and, if you like, some crispy fried sage. Less than 5 minutes for a dish that is a work of art. 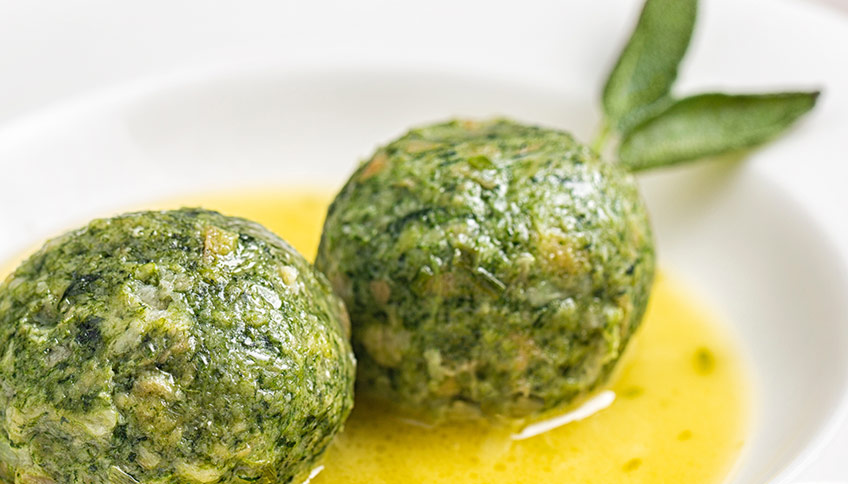 An innovative recipe to celebrate autumn and all its flavours. The dish itself is also gorgeous, with the colour contrast between the green of the dumplings and the intense orange of the pumpkin cream.

A little trick: cook the pumpkin in the oven with the peel, it will be more tasty. Blend with a pinch of pepper and plenty of sage and you’re ready to serve.

Let’s borrow this exceptional cheese from nearby Lombardy, a product with an intense taste and unique scent.

Melt the cheese in a saucepan with whole milk and a knob of butter, season with freshly ground black pepper and serve. A nice pool of fondue on each plate and a couple of dumplings in the center.

The "Canederli" from Trentino truly are an exceptional, authentic and versatile dish. They hold all the flavour of rural tradition and the art of knowing how to do things with taste.

Try them in these recipes or as you prefer, letting imagination guide you. When a product is this good, you just can’t go wrong!