Caciocavallo podolico cheese (which is a Slow Food Presidium and has been recognised as an Italian Traditional Agro-Food Product) and PDO Caciocavallo Silano are semi-hard cheeses with a stretched curd (pasta filata) which are obtained by skilfully processing cow’s milk from the South of Italy. They both have very few and irregular eyes and as ripening progresses, their flavour becomes more intense and spicy and their colour turns to yellow.

The rind is smooth, thin and slightly dented, because of the way it is tied. The Podolico’s paste has an alabaster colour and the Silano’s paste has a straw yellow colour. The texture of both cheeses is compact and uniform, the Silano cheese’s paste being slightly greasier and creamier.

How is Caciocavallo cheese made?

Caciocavallo Podolico cheese and Caciocavallo Silano cheese undergo quite similar production processes. Fresh milk is heated to around 38 °C and continuously stirred to distribute heat. Once it has reached the right temperature, the rennet is added, which can be either calf rennet - which has a delicate and sweet flavour - or kid rennet - which has a more intense taste.

As a matter of fact, when equal in ripening, the Caciocavallo Podolico cheese is harder and less elastic. Then the cheese maturation begins, i.e. a lactic fermentation lasting from 4 to 10 hours. Maturations ends when the curd is stretched, that is when it’s plunged in boiling water and it forms shiny, elastic and sturdy long fibres.

Then the cheese is shaped by hand in a truly wonderful manner, so as to obtain the traditional amphora shape with a smooth outer layer and no eyes on the inside. The cheese is plunged in boiling water and then cooled down in water, too.

Let’s move on to the brine which is responsible for the one-of-a-kind salty flavour of this cheese. After this step, cheese-makers tie the cheese. The finished cheese is pressed down vigorously in order to perfectly spread out its surface, which must not have any creases, and each piece is closed at the top and tied with raffia strings.

The last step is ripening which takes place in cool and well-ventilated areas. Cheeses are put in pairs and hung on rods to guarantee the best exposure to air. Ripening lasts at least fifteen days for Podolico cheese and 30 days for Silano cheese, but it can last up to five/six years. 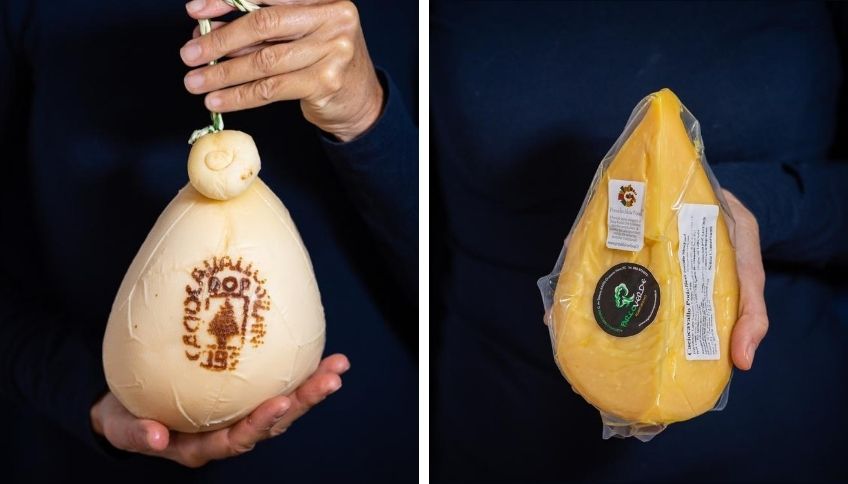 The Podolica cattle breed is reared in Campania, Basilicata and Apulia, i.e. in the Southern Apennines where pastures are not extremely lavish and water is not abundant. This breed was first brought to Italy during the barbarian invasions and it originally comes from Ukraine, from the Podolia steppe, from where it gets its name.

It was once a very widespread breed, but Podolica cows rearing farms are now very few. Furthermore, these cows are not suitable for stables; they need big spaces to move around. They live outside in a wild or semi-wild state, following the transhumance cycles. In the summer time, they move to the mountains at an altitude that can reach 1,200 m and when the weather gets colder, they come back down to the valley.

They do not make a lot of milk, but the milk they make is truly exceptional. High in protein and fat, it has a unique scent of pastures and Mediterranean vegetation. This milk is processed according to a century-old tradition and the result is a fine and selected product: Caciocavallo Podolico is a truly unique cheese.

This cheese originated in the Sila plateau, but it is also produced in Calabria, Basilicata, Campania, Molise and Apulia. On the 10th July 1996, the 1237/96 regulation officially turned it into a PDO cheese, recognising that territory where it is produced plays a pivotal role in obtaining the quality features of this cheese, and aiming at protecting this cheese and closely monitoring its product specifications.

When we talk about Caciocavallo Silano cheese, we have to mention the Caciocavallo Silano Cheese Supervisory Consortium. It was founded in 1993 and its headquarters are located in the province of Cosenza. It’s recognised by the Italian Ministry of Agricultural, Food and Forestry Policies (MIPAAF) and aims at protecting, enhancing and monitoring this product and its protected designation of origin.

The consortium decided to only use one brand for all related producers: a heat-affixed logo with a dotted shape. Cheeses should also be branded with the manufacturer’s identification number, as well as the label, on which the sentence “Certified by an inspection body authorised by the MIPAAF” should appear.

Time brings out the best in these products. Mature cheeses have a more intense flavour and a more complex scent.

The scents of the Mediterranean vegetation can be found in the Caciocavallo podolico cheese. The experts will be able to discern several aromatic herbs, wild fennel, liquorice, myrtle, as well as many mountain aromas, such as Cornelian cherry, blueberries and wild strawberries.

Caciocavallo Silano has a more delicate flavour, which is less pungent, as well as a particularly enveloping taste.

Caciocavallo podolico is an excellent cheese which is rarely used in any recipe. It is usually served at the end of a meal and always at room temperature. It should never ever be served cold.

There are many ways to serve such a cheese. It can be combined with honey, preferably chestnut or arbutus honey. It goes really well with mushrooms, too, and is ideal in a Tagliatelle dish with Porcini Bolete mushrooms. Or it can be as simple as fresh Ciabatta bread, sliced Caciocavallo Podolico and a glass of Aglianico wine. A product like this cheese doesn’t need much more than that.

Caciocavallo silano is more versatile. It melts perfectly and it can be paired with toasted bread or Bruschetta. You can also dice it up, bread it and fry it to serve as a starter that your friends will never forget. You can grill it with vegetables to make barbecues more fun for vegetarians, too! It pairs well with white wine when it’s not mature, and with red, full-bodied wine when it’s mature and has a more intense flavour.