PGI Panforte from Siena is a Christmas dessert made from almonds, candied fruits, honey and spices. Panforte is a must at Christmas time, but why not enjoying its soft and scented dough all year round?

Traditionally, Panforte was a product for rich people, since its ingredients were very costly. That explains why it was only eaten during the festivities. However, Panforte is delicious all the time, and it can also be used to enrich many dishes. Let’s take a look at this confection and its ancient history. 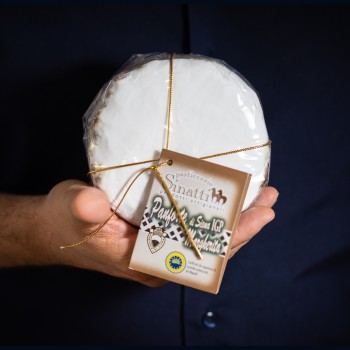 Panforte from Siena is a Tuscan traditional Christmas dessert; however, its enveloping flavour of spices and candied citrus fruits makes it delicious all year round. It is a rich and genuine confection which pairs perfectly well with a glass of sweet, liqueur wine. When did it originate? This dessert has very ancient roots. Its recipe greatly changed in the 13th century, when spices arrived from the East and were added to the ingredient list; it is the spices that give that signature, slightly sour note from which the “Panforte” cake (which means ‘strong, intense bread’) takes its name. Legend says that the PGI Panforte from Siena Margherita is made from 17 ingredients (spices included), as many as the city quarters. One thing is sure: almonds, honey and candied fruits must be of prime quality, such as those used by the Pasticcerie Sinatti, a great company renowned for their traditional confections from Siena.
14,99€
See the product

Black Panforte from Siena is the perfect combination between the traditional flavour of Panforte and tempting bitter cocoa. As a matter of fact, Panforte is usually coated with powdered sugar, whereas this time it is coated with refined bitter cocoa of the highest quality. A careful selection of ingredients is what makes the products by Pasticcerie Sinatti truly one of a kind. Panforte is a rich and genuine cake with a crunchy twist given by almonds and the enveloping, light and slightly sour flavour of spices and candied orange and melon. That’s why it is delicious all year round, and not only at Christmas time, when it is a must in Siena and all over Tuscany. It should not be mixed up with Panpepato which has a completely different taste. They probably have a common origin, but black Panforte has its own recipe which is perfectly mastered by Pasticcerie Sinatti.
14,99€
See the product 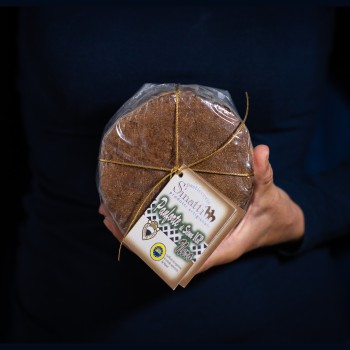 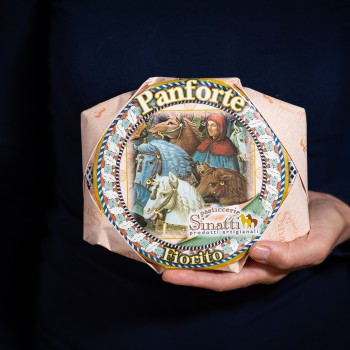 Panforte fiorito is an enriched version of the classic Panforte Margherita. The ingredients are the same and both of them are coated with powdered sugar, but the Panforte fiorito hides a secret inside: a layer of almond paste which makes it deliciously soft. It is made according to the traditional recipe from Siena, which includes honey, spices and candied fruits. Pasticcerie Sinatti masters this recipe and only selects prime-quality ingredients. Panforte fiorito celebrates almond and its unique taste: crunchy in the base and soft and creamy on the upper layer. It would be such a shame to only eat it at Christmas!
16,90€
See the product

Let’s make one thing clear straight away: the first Panforte - the original and classic Panforte - is the black one. However, Panforte Margherita, also called white Panforte because it is coated with a generous layer of powdered sugar, is the most common version, and when we say “Panforte”, we immediately think of this one. Apart from the coating, which is bitter cocoa for the black version and powdered sugar for the white one, another difference between the two versions lies in the candied fruits that are added to the dough. Candied melon is added to the black Panforte, whereas candied citron is added to the white one.

Galgano Parenti probably reckoned that candied citron had a more refined flavour, which was more suited to a cake that was dedicated to a queen. Otherwise, almonds, honey, candied orange, mixed spices, sugar and flour are used in the two versions and the shell is made by a very thin layer of starch wafer.

The other two Panforte types are “Panforte delle Dame” and “Panforte fiorito”. The first one is the Panforte that Giovanni Parenti invented in 1820 and it is still very much appreciated today. Peeled almonds are added to the dough, as well as candied melon and orange. A dark chocolate glaze coats this confection, making it similar to a Sacher cake, by which it was allegedly inspired.

“Panforte Fiorito” is more or less like a Panforte Margherita (it also contains candied citron, instead of candied melon), but with one additional sweet twist: almond paste. The layer of almond paste makes the confection softer and the aroma of almonds stands out over the aroma of candied fruits.

The flavour of this cake reflects the skills, respect of the territory and authenticity of the main ingredients. Especially when the quality is nothing short of excellent, as is the case here, we should stop considering Panforte as a mere Christmas dessert and start eating it all year round.

Thanks to honey and dried fruits, it is a healthy and readily available source of energy. Panforte is a “convenient” cake, too, since it is not easily perishable. If you give it as gift, you’ll make a good impression for sure, but if you eat it yourselves, you will be even happier. It is a confection that really deserves more appreciation.

In order to understand the history of Panforte, we first must explain how important its geographical location was. Siena, as we already mentioned, was crossed by the Francigena route which was taken by pilgrims going to Rome, and by merchants from all over Europe.

Amongst the finest and most expensive trading goods, there was pepper, imported from the East. Starting from the 13th century, pepper was used in Siena, together with dried and candied fruits, spices, honey and flour, to make Panpepato which is the ancestor of Panforte.

Panpepato was a cake exclusive to the nobles and clergy and its recipe was jealously guarded by the “Arte dei Medici e Speziali”, Siena’s guild of physician and spice sellers. It was marketed around the monasteries and the spice markets and was usually served at the end of banquets to rich people.

It was also in Siena that people used to make confections from fruits - especially plums, figs and grape - and lots of honey since the dawn of time. This confection used to be known as Panis Fortis -sour bread -, because fruit would turn sour if the cake wasn’t eaten quickly enough. As we already said, in the 13th century, spices landed in Siena. Pepper, but also cinnamon, cloves and nutmeg were then added to the traditional Panis Fortis cake.

The most traditional and common cakes became delicious confections for rich people. Today’s Panforte was born out of a mixture between commoner Panis Fortis and fine Panpepato; honey, candied and dried fruits are still the main elements, to which pepper and mixed spices are added. This confection has ancient roots: it was born as a cake for peasants and then succumbed to the charm of Eastern spices. That’s how the best things are made: mixing and combining different things.

Panforte marked the history of the city with the Montaperti battle in 1260. The Guelph faction from Florence and the Ghibelline faction from Siena battled each other here; Siena won and conquered Montepulciano and Montalcino back. The legend says that the two armies were left exhausted: Florentine soldiers only had scarce and non-nutritious provisions, whereas soldiers from Siena had a rich dough made from honey and dried and candied fruits, which was pretty popular at the time. Fuelled with energy (and heat), they managed to win against the unlucky soldiers from Florence thanks to Panforte.

Another date worth remembering is 1879. On the occasion of the Palio di Siena horserace, the Queen Margherita and the King Umberto I of Italy came to town. The spice seller Galgano Parenti, who at the time owned the oldest factory of Panforte from Siena, decided to update the recipe to celebrate the presence of the Queen. That’s how the first Panforte Margherita came to be: it’s white, since it is coated with powdered sugar, whereas Panforte had always been black up to that point, since it was usually covered with spices or bitter cocoa.

In 1820 Giovanni Parenti, the father of Galgano and founder of the “Panforte Parenti” factory, had already invented the chocolate Panforte, dedicated to dames - it was a family of Panforte devotees, to say the least! The creation of the Panforte Margherita recipe marks a decisive moment, as this version became the most commonly available on the market. Later on we will take a look at the differences between the Panforte types, of which there are two officially recognized variations as well as at least two other types.

Another year to remember is 2013, when Panforte from Siena obtained the Protected Geographical Indication label, proving how the features of high-quality, real Panforte depend on its location. The inspection body checks whether the rules written in the product descriptions are respected. Let’s take a look at which ingredients are essential and how many versions of Panforte there are.

Try our panforte with: 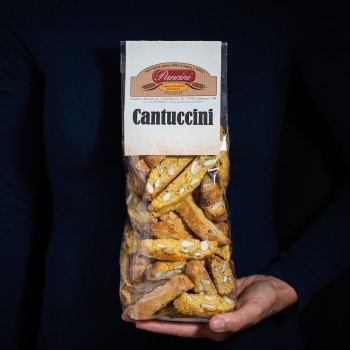 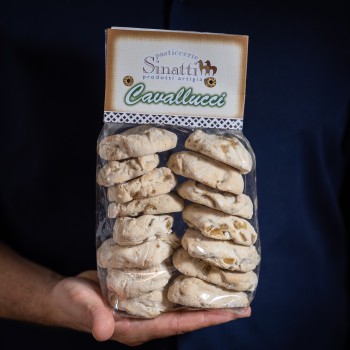 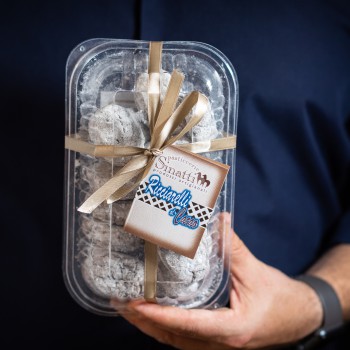 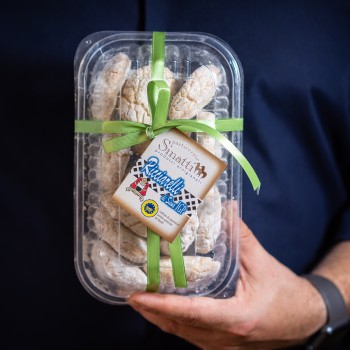