Panettone is much more than a Christmas cake: it is the symbol of Italian Christmas. It has an amazing evocative power and, when it is truly delicious, it is able to rewind time and recall good memories and family traditions. But how can we pick the good ones? What makes a Panettone good? One word: handcraft. 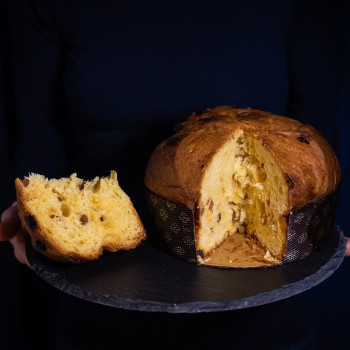 The Panettone with a capital P by Opera Waiting – 100% Nature, an innovative confectionery workshop located in the middle of the peaceful hills of San Gimignano in Tuscany. Gabriele created a classic handmade Panettone using only natural ingredients. Upon cutting it open, we are immediately struck by the perfect alveolar structure of the dough, which is as soft as a cloud. This structure is obtained thanks to the use of sourdough and natural leavening. This Panettone has a real, authentic flavour which best represents tradition; it is made from organic prime-quality ingredients, such as butter, stone-ground ancient grain flour, candied fruit and honey. We suggest opening it up and keeping it at room temperature at least half an hour before serving it.
10,97€
See the product

The one and only pandoro, a must-have on the Christmas table! Fluffy, soft and fragrant, descends from the Nadalin, the ancient Christmas cake of Verona. Then, a good dose of butter and eggs worked wonders, creating a simply perfect dessert, one of the symbols of Christmas all over Italy. The quality of a handmade pandoro is unbeatable and the Perbellini pandoro is a guarantee. Seen from above it’s an eight-pointed star, while from within it is a gorgeous pan de oro – hence its name - with perfectly uniform pores. The scent already says it all about the goodness of this pandoro, but it’s the taste to win us over. In addition, each pandoro is wrapped by hand in an elegant package, both beautiful to give and to bring to the table, to offer guests a slice of delicious goodness. Rinomata Offelleria Perbellini is an historical institution in Bovolone, in the province of Verona. Since the mid-nineteenth century, every day its pastry chefs bake traditional handmade cakes of the territory, with passion and experience. Christmas cakes are the pride of this production, always ready to give a moment of pure sweetness.
28,90€
See the product 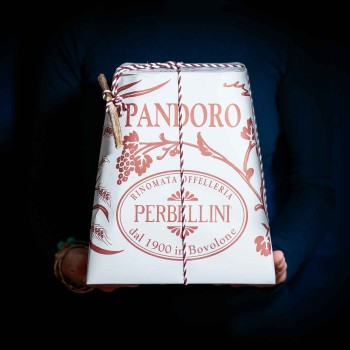 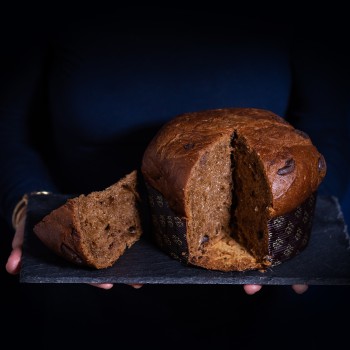 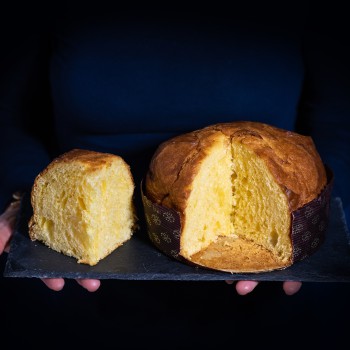 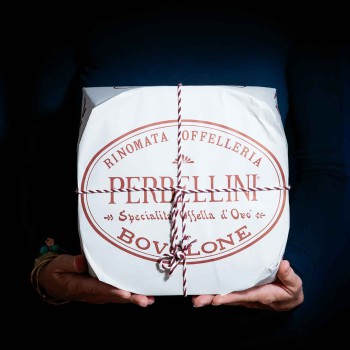 How is artisan Panettone made

Panettone belongs to the family of leavened foods. They are neither easy nor quick to make, quite the contrary: a certain amount of experience, manual skills and an expert eye are required to understand all the steps that leavening entails.

In order to make it the right way, we need sourdough. And this is an entirely new topic to discover. Sourdough is alive and must be fed and nurtured. Successful baking a Panettone depends on it.

Since it is a cake with two doughs, sourdough is firstly mixed with flour and water, then sugar, butter and yolks are added little by little. It may seem easy, but it is not. If the dough does not form a proper gluten network, it’s not going to properly absorb the butter and eggs and ingredients will not bind.

If, on the contrary, everything goes well, the dough is going to leaven for the first time. It should be kept in a warm place for at least 12 hours and should triple in size.

Then, we are back at it again: we add the remaining flour, water, yolks, sugar and butter. Once the ingredients have bound, we also add honey, raisins, candied orange dices, citron, lemon zest, orange zest and a pinch of salt.

The dough is then shaped into a loaf and it is put into a special mould. The second leavening lasts for around 7 hours, then the dough is cooked.

Once the loaf is out of the oven, it is left to cool down upside down for at least 12 hours. This helps stabilising the ingredients and creating an absolutely unique flavour mix for which this exceptional sweet bread is known.

The first rule of a handmade Panettone is only prime-quality ingredients, no compromises or shortcuts. This means that the ingredient list of a truly handcrafted Panettone should never include mixtures, semi-finished products, replacements or substitutes for the sourdough. No cheating here. Either they use sourdough or we are not interested in their product.

Mono- and diglycerides, preservatives, emulsifiers, additives and synthetic flavourings are also forbidden. There shouldn’t be anything to hide if they only use the best raw materials.

No clarified butter, a centrifuged butter where caseins are removed, which is very easy to preserve and to handle; no margarine (are you crazy?!), no powdered eggs. Only natural ingredients: fresh eggs, fresh butter, flour, candied fruit, honey, sugar, water, sourdough and that’s it.

Pay attention to candied fruit; if the pieces all look exactly the same, there is something weird going on. Handmade candied fruit is not mass-produced, but rather cut by hand and, as such, it should look irregular. You should also be able to see the candied fruit and raisins straight away, which should be scattered all around the surface of the slice. And there should be a lot of them. Never mind if some people don’t like them – that’s how traditional Panettone is made; take it or leave it.

We at Italy Bite went the extra mile. For our assortment, we picked Opera Waiting, a very creative and genuine confectionery. To make this Panettone, they only use extremely fresh and organic ingredients which make for a one-of-a-kind flavour.

Texture and moisture: Panettone should be stretchy

Handcrafted Panettone has an amber and golden colour on the outside and a bright yellow colour on the inside thanks to the eggs and, more importantly, it should never have the same consistency as bread. It shouldn’t crumble upon cutting and it should almost be melting when you bite into it. When the product is made to state-of-the-art standards with the right ingredient ratio and most of all a well-managed leavening, Panettone should have a stretchy consistency.

As far as moisture is concerned, the dough should neither be too dry nor too moist. When a Panettone is too heavy, it may be in part due to underbaking, but it mainly means that the yeast was not strong enough to make the dough rise. It’s no easy feat!

That’s the most important step. Natural leavening affects the quality of the end product and it is the trickiest step that changes both consistency and taste. Remember that sourdough starter is actually alive, since it contains yeasts and bacteria proliferating.

No two sourdough starters are the same, because the microflora they contain changes according to the flour, water and environment. Even climate conditions can greatly affect rising.

Being able to manage a natural leavening is an art and making high-rising, soft and stretchy handcrafted Panettone is extremely hard. The leavening specialist must continuously check the health of the sourdough starter, adding a pinch of flour or a drop of water and changing the room temperature if needed. The proof of success lies in the alveolar structure or porosity.

The secrets for a perfect alveolar structure

One look at Panettone is enough to understand if the natural leavening has worked or not. Take a look at the alveolar structure or porosity; it shouldn’t be too dense, like you would see in sandwich bread - and that’s often the case of factory-made Panettone – but it shouldn’t be too loose either.

It should ideally have inconsistent pores that are elongated and irregular and scattered in a rather vertical manner. Upon cutting, you should notice that the yeast wanted to rise. If the dough is kneaded too long, the pores will look flat, if it’s kneaded too little, it will probably break while it bakes.

Another thing: yeast does not work properly if it’s cold, hot, hungry, thirsty or tired. Perhaps now we realise how hard it is to make perfectly leavened, handcrafted Panettone with a perfect alveolar structure and an incredible flavour.

It originated in Milan and we all agree on that. Some doubts were raised concerning how and when it originated, though. The story of Panettone is shrouded in a metaphorical and literal fog.

As far as the origin of this incredible cake is concerned, there are mainly two schools of thought.

The first school of thought is made of romantic people that affirm that Panettone was invented by a young man in love to win a girl over. Lord Ulivo degli Atellani, a falconer from Milan, fell head over heels for Adalgisa, the daughter of the baker. He decided to start working as an apprentice in her father’s bakery and wanted to bake something unforgettable that would win the hearts of father and daughter alike.

Flour, eggs, honey, sugar, butter, candied fruits, sultanas and, the main ingredient, a leavened dough. Adalgisa fell in love with Panettone and, to some extent, with Ulivo, too, and they ended up getting married.

However, there is a second story circulating around, about a hall boy saving the day of Ludovico Sforza’s cook. But let’s go in order.

The story is still set in Milan, at Ludovico Sforza’s court, somewhere between 1480 and 1499. It was Christmas and there was a feast happening at the Sforza Castle. The cook burned the cake and was, rightly so, devastated. The hall boy Toni came to the rescue and slightly improvising, he mixed sugar, eggs, candied fruits and raisins with leavened bread that he had found in the kitchen.

That might be the real story, since the name “Pan di Toni” (Toni’s bread) could have turned into “Panettone” over time.

Regardless of the story, artisan Panettone is now a part of Milan’s DNA. Alessandro Manzoni, a great Italian writer, loved it very much; a trusted baker would deliver Panettone to his house every year to thank him for having put the name of his bakery in his masterpiece “The Betrothed”.

We have talked about Christmas, but let’s not forget Saint Blaise. The legend narrates that Saint Blaise saved the life of a child that was choking on a fish bone; he, hence, became patron saint of the throat. On the 3rd of February, the day dedicated to this saint, people from Milan eat blessed Panettone as a protection against throat ailments.

We could say that it is an almost miraculous cake. But let’s unveil the secret behind its deliciousness.

Try our Panettone and leavened products with: 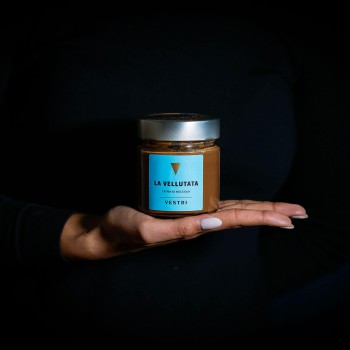 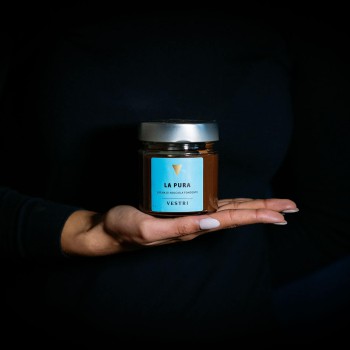 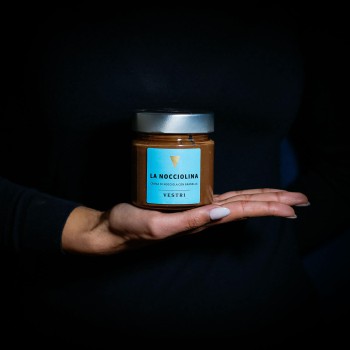 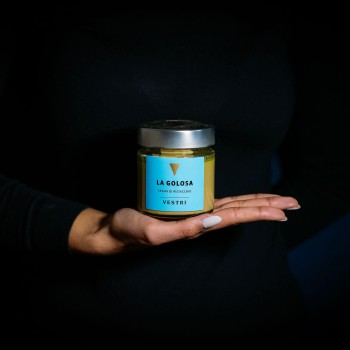 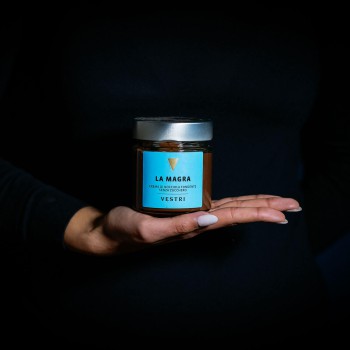