Orecchiette pasta from Bari: the story and tradition behind an icon

Orecchiette pasta from Bari is the symbol of traditional and local cuisine. We immediately associate Orecchiette pasta with the city of Bari and with turnip greens which are the ideal condiment for a truly outstanding fresh pasta dish.

How was this pasta type first created and how did it spread throughout the region? How is this pasta usually dressed? And how come it is so delicious? Let’s take a look together.

Orecchiette and the Angevin dynasty

The first theory, which seems the most likely, postulates that the story of Orecchiette pasta from Bari is deeply intertwined with the story of Angevin dynasty, and especially with Joanna I from the House of Anjou (1325-1382).

Joanna I – Queen regnant of Naples, Countess and Provence and Forcalquier and holder of the title of Queen of Sicily and Jerusalem – daughter of Charles and Marie of Valois, was a powerful and cultivated woman and patron of the arts. She married Andrew from the House of Anjou, whom she later perhaps had killed; she then remarried Louis Prince of Taranto and upon his death, James IV of Aragon; she finally married Otto Duke of Brunswick. She certainly led a life full of action, passion, power and blood due to never-ending succession wars between rival contenders for the throne.

Among all of this, which was already a handful to deal with, Joanna visited the territories of her reign. In 1348, the King of Hungary Louis the Great invaded Naples and the Queen fled to Avignon to the Pope. During her stay, she is said to have travelled far and wide through the valleys of Piedmont. Truth be told, there are no historical evidences backing this statement, but sometimes legends are more interesting than the actual truth.

So, the Queen was in Piedmont, in the Stura valley to be more precise. People from this valley used to make since ancient times a fresh pasta made of flour, water and oil, called Crouzet, which is very similar to Orecchiette pasta from Bari. Just like Orecchiette, the dough of Crouzet pasta is also rolled under the thumbs, to make a small concave shape. The dressing is what makes the difference: Orecchiette is dressed with turnip greens and tomato, Crouzet with mushrooms and wild game meat. Apart from this, the two dishes are more or less the same.

The Queen loved this dish so much, that she asked her servants to learn how to prepare it, to be able to recreate it once they had gotten back home. And that’s exactly what happened. So, the question is: how did it reach Apulia and the city of Bari?

The diffusion of Orecchiette in Apulia

The region Apulia is home to the “Tavoliere delle Puglie” which is the second widest plain of Italy after the Po Plain. Prime-quality wheat is cultivated here in great quantity; this explains why Orecchiette pasta gained renown in this area.

Wheat from the Tavoliere plain has been used since the Middle ages to make a pasta shape that looks like a rather big and thick disc which is thinner in the middle to let it dry out more easily. As a matter of fact, letting fresh pasta dry out meant being able to stock up in the event of famines and, another important factor, dried pasta could also be loaded on ships.

That’s how this pasta reached the city of Bari, the most important harbour on the Adriatic Sea. After being ruled by Normans and Swabians, the city was seized by Angevins, then by Aragons and lastly, by the Sforza family from Milan. Bona Sforza, queen consort of Poland, moved the court to Bari in 1548 and her body is still laid to rest in the Basilica of Saint Nicholas.

Those were wealthy and lucky years for the city; maritime trade and exchange of goods increased. More ships meant more food for sailors, and orecchiette pasta from Bari was ideal, since it was very nutritious and non-perishable.

This second theory postulates that Orecchiette pasta was first created in Sannicandro di Bari (14km South of Bari) by the large Jewish community that settled here prior to the Norman invasion. Between the 12th and 13th century, Normans and then Swabians occupied the area, but adopted a protective approach towards the Jewish community.

It is told that Normans were actually quite fond of Jewish cuisine. Orecchiette pasta was also affected by this new influence, at least as far as its name is concerned. As a matter of fact, Hamantaschen (Haman ears), i.e., confections made to celebrate Purim, actually inspired the name of this pasta shape (“Orecchiette” comes from the word “Orecchie” which means ears).

While the name Orecchiette is used throughout Italy and it indicates the pasta shape, the oldest name of this pasta shape, Strasc’nati, actually describes how this pasta is made and is only employed in the local dialect from Bari.

One thing is sure: in order to make Orecchiette pasta, one needs experience and patience. The dough should be left to rest and kneaded little by little, to avoid drying it out. Orecchiette pasta is only made by hand, one by one, by applying pressure to the dough with the tip of the finger to slightly roll the pasta, so that it obtains its signature concave shape, thicker on the edge and thinner in the middle.

Orecchiette should be as small as the tip of a pinkie; they should have a consistent appearance and a rough surface to hold onto the sauce. If you’re looking for the real Orecchiette pasta from Bari, the right address is the company Danieli, il forno delle Puglie (Apulia’s Bakery). It is a bakery that knows one thing or two about good-quality flour: only flour from Tavoliere delle Puglie plain is used for its products which are 100% natural, handmade and genuine. 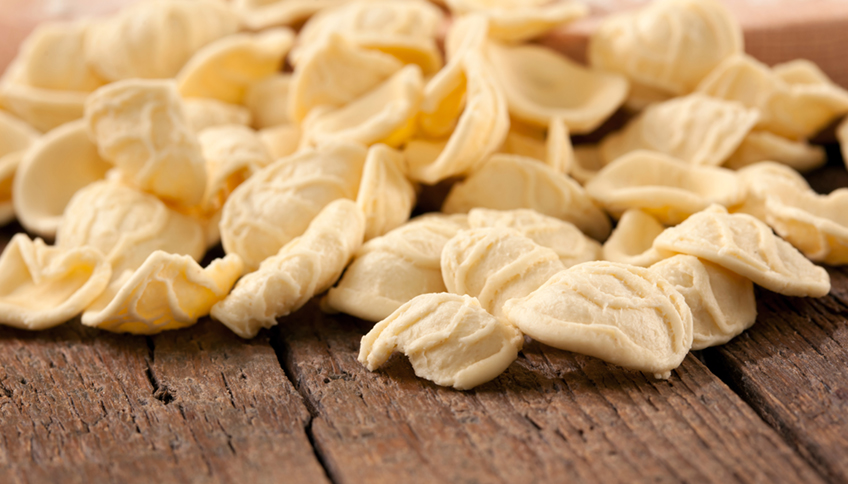 Orecchiette pasta from Bari: between tradition and innovation

How to dress Orecchiette pasta? A classic condiment to Orecchiette is turnip greens. Some people like to add one anchovy fillet and, although the traditional recipe doesn’t call for it, we must say that it pairs really well with the pasta dish.

Orecchiette is also delicious with tomato sauce and with some grated Caciocavallo podolico cheese, which stems from the same area, or with hearty Ricotta cheese. It also pairs exceptionally well with all vegetarian dressings, such as broccoli, artichokes, bell peppers and many more seasonal produces.

It is, after all, an exceptional product. If you serve a dish of Orecchiette from Bari, you can never go wrong.