Tortellini from Bologna awaken the senses, make you feel good and bring a festive spirit on the table. It’s the perfect comfort food, since they are delicious and genuine, assuming that they are properly made.

It is a festive dish, a Sunday recipe that’s unfortunately often only eaten in the winter months, since they pair really well with meat broth. I also like Tortellini without broth and I sometimes even add them to a cold pasta salad.

How are the real Tortellini from Bologna made?

Let’s start from the beginning: how to spot high-quality Tortellini from Bologna.

As far as Tortellini, as well as almost every type of stuffed pasta, are concerned, the pasta dough must be moist, otherwise you cannot seal it. Properly made Tortellini should not break and leak filling while they cook.

Concerning the filling recipe, some people stick to the original recipe, others revisit it to make sure that the whole family loves it, by changing ingredient ratios or taking out or adding an ingredient. Regardless, the filling should always be flavourful, should have a balanced ratio of filling to pasta dough and have a creamy texture on the palate.

How do you serve Tortellini? You can serve them with mixed meat broth, with capon broth or even without broth. The most traditional condiment is made of heavy cream and ham, but you can also dress them with ragout or with just melted butter and Parmigiano cheese.

The traditional recipe of Tortellini from Bologna

The original recipe was lodged with a notarial deed with the Bologna Chamber of Commerce on 7th December 1974 by the “Dotta Confraternita del Tortellino” (Tortellino association). The original recipe includes pork loin seared in butter, dry-cured ham, real Mortadella from Bologna, Parmigiano reggiano cheese, eggs and nutmeg. For the pasta dough, you need eggs and flour in equal proportions: one egg for 100g of flour. The ingredient doses listed in this recipe yield 1,000 Tortellini which should weigh around 5g each.

On the recipe you can also find instructions on how to prepare the broth. It must be made from beef and free range chicken, celery, carrot, onion and salt, which should be put in cold water and boiled for around three hours.

Some people criticised this recipe, since it didn’t mention what size the Tortellini had to be, but only focused on ingredients and ingredient ratios.

Some people prefer to cook the meat, other people rather grind raw meat, and other people don’t add meat at all to their filling and only put Mortadella and dry-cured ham. Parmigiano cheese, nutmeg, egg, salt and pepper, however, are used in every Tortellini recipe.

Even though it is a homey recipe, only few people know how to properly make Tortellini and that’s why many people resort to pre-packaged Tortellini. However, there are many different types of Tortellini. Let’s start by saying that the majority of industrially-made Tortellini cannot even be compared to traditional handmade Tortellini.

Making fresh and stuffed pasta is an actual artisan craft and it’s impossible to achieve the same results on an industrial production chain. Only the best pasta makers from Bologna, such as Gratifico, manage to make real Tortellini from Bologna, focusing on their passion for traditional pasta-making in Bologna. And you can see and taste the difference.

Gratifico’s Tortellini have a coarse pasta dough, made from free-range eggs, which is stuffed with a delicious filling with PGI Mortadella Bologna, dry-cured ham and 30-month aged PDO Parmigiano reggiano mountain cheese. That goes to show that it’s the ingredient quality, among other things, that makes the difference between artisan and industrial production.

Given their research and focus on quality, it is not surprising that Gratifico’s workshop was awarded with the 2019 gold medal for the best pasteurised Tortellini from Bologna in the fresh pasta category. 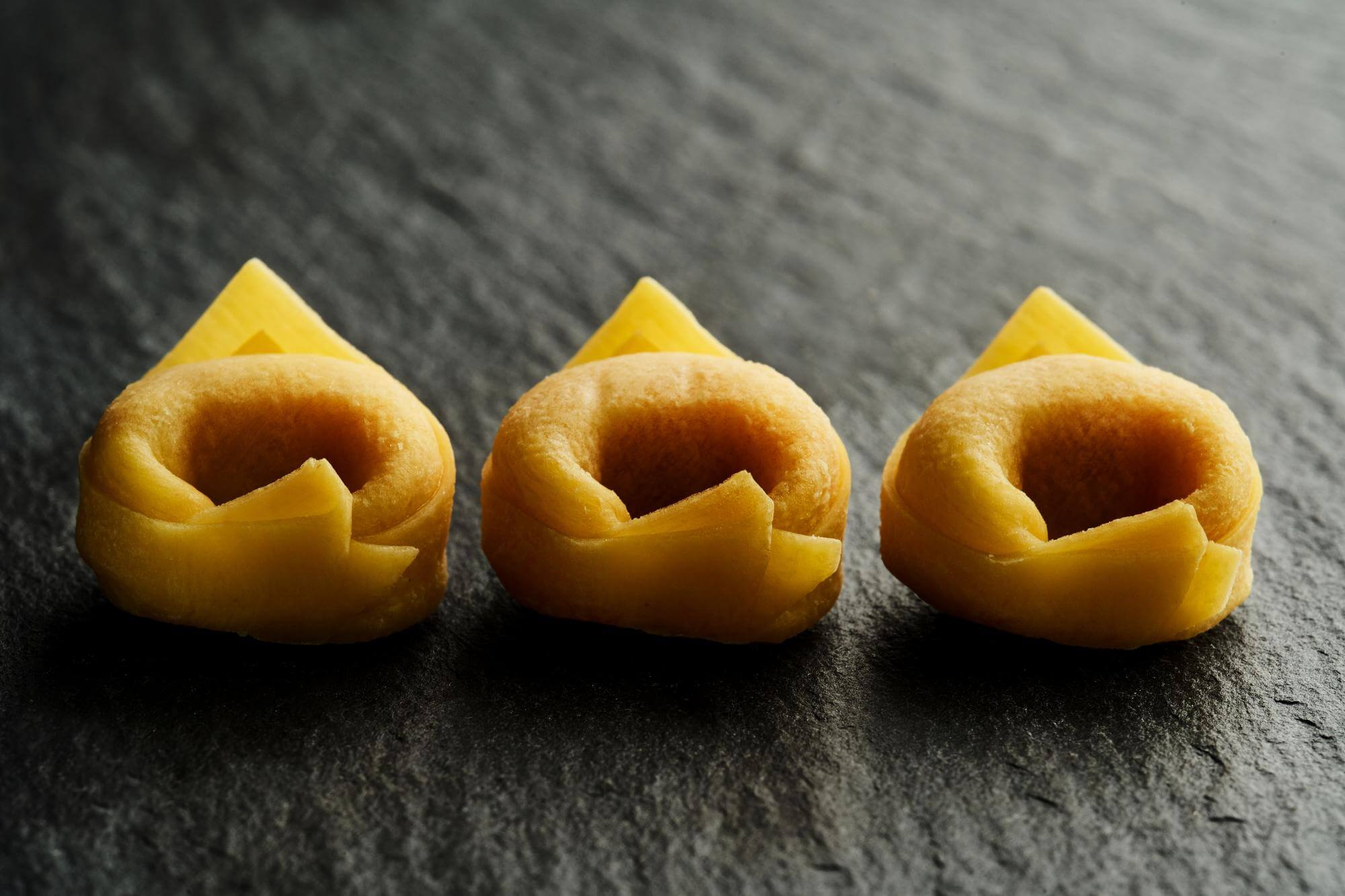 Tortellini are a holiday dish which comes from the provinces of Bologna and Modena.  The recipe from Modena is, however, different from the Bologna recipe, since the filling also includes veal and sausages.

The name “Tortellino” is the diminutive of Tortello - a bigger stuffed pasta format. As it is the case with many stuffed pasta or quiches, this recipe was created with the aim of using up leftover roast, cheeses or vegetables. Today, Tortellini have become a true Italian specialty made from great ingredients, such as PGI Mortadella from Bologna or PDO Parmigiano reggiano cheese.

But let’s go back in time. Tortellini were first eaten in Bologna around the 12th century, but the recipe was written down only in 1300. The meat filling and its preparation would be described in details by the cook Maestro Martino only a century later.

However, the big question is whether Tortellini are from Modena or Bologna. It’s not clear, given the fact that since the Middle Ages documents state that Tortellini come from Castelfranco nell’Emilia. Castelfranco nell’Emilia was located in the province of Bologna up until 1927, under the House of Este. Today, however, this city is located in the province of Modena, although it still belongs to Bologna’s diocese.

There are many legends about the origin of this delight from Emilia. Some people reckon that Tortellini from Bologna were first created in the Corona inn, as the innkeeper peeked through a keyhole into a lady’s room. He was struck by the beauty of her navel, and decided to recreate it in the kitchen as a Tortellino.

According to another legend, at the end of a battle day between Modena and Bologna, Venus, Mars and Bacchus met at the Corona inn in Castelfranco nell’Emilia. When Mars and Bacchus woke up in the morning, they let Venus sleep in. When she woke up, she called the innkeeper and he saw her naked and was struck by her beauty. Once he got back to the kitchen, he created the tortellino shape, thinking about Venus’ navel.

Tortellini di Bologna are a true gastronomic delicacy. They originated in Emilia and have since become an Italian specialty. With their taste and consistency, they remind us of festive days, of Christmas and eating at grandma’s house.

If you want to celebrate them as you should, the 13th of February is National Tortellini Day.