Nothing can stop us from eating delicious food. And even though we cannot actually travel at the moment, we can still discover a wonderful territory full of delicacies. We are talking about Trentino Alto-Adige and its cold cuts and cured meats.

The saying “to make a virtue out of necessity” was certainly applied here. As a matter of fact, the tradition of preserving meat stemmed from the need to stock up for winter. What originally began as a technique intended to satisfy a primary need actually became a form of art; that’s how some of the best cured meats that we can still savour today, were first created.

Trentino-Alto Adige is Italy’s northernmost region. It is characterised by Alps, valleys, passes and lakes that make for breath-taking landscapes. This region encompasses many different environments, the climate ranging from continental to alpine and the flora including spruce trees, as well as olive trees.

More than half of the land is barren, since it is covered by lakes, woods, peaks or glaciers. Agriculture is practiced at the bottom of the valley, where cereals and fruit trees are mostly cultivated. Let’s not forget that Trentino is the country’s bigger manufacturer of apples. The lumber industry is another strong asset of the region: the lumber sector satisfies 20% of the national demand and represents 51% of the turnover of the sector as a whole.

The region’s most valuable activity is animal rearing. According to the system of summer pasturage, cows move from the stables to high-altitude pastures at more than 1,600m above sea level. Here the milk just tastes different, and so does the meat. Pigs are also reared here, which leads to the manufacture of one of the region’s flagship products. 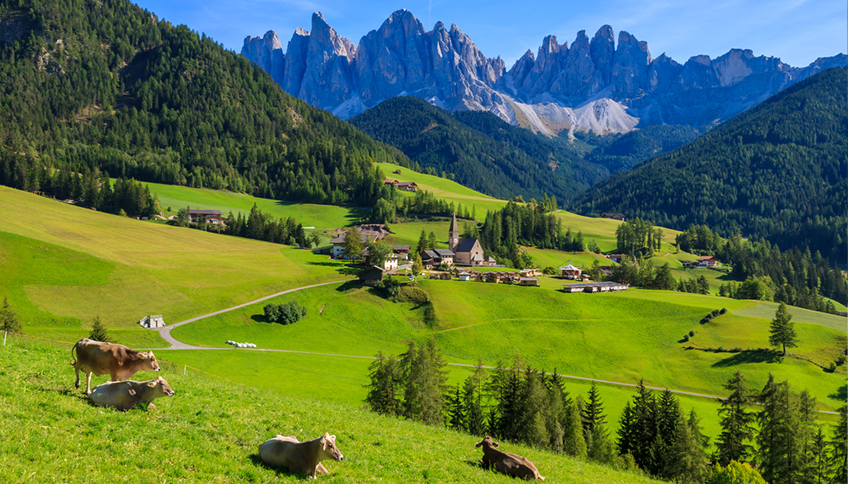 The home of speck

Let’s move up North to Alto-Adige, a true paradise on earth plunged in nature. The climate here is truly one of a kind: more than 300 sunny days over the year, little rainfall and Alpine landscapes with almost Mediterranean temperatures.

Speck, like all cold cuts, was born out of the need to preserve meat for periods of famine. Pigs were killed at Christmas and nothing could go to waste. Oversimplifying, we could define speck as an aged and smoked dry-cured ham. Like for hams, only the best legs are selected, that should be lean and meaty.

Legs are then covered with salt, pepper and spices. Basic ingredients are always the same, but each manufacturer can add different spices to the mix, thus giving a personal touch to the product. Dry salting lasts 3 weeks, during which the legs are often flipped over, so that all the aromas are soaked in a uniform way.

Afterwards, it’s time to smoke the legs; this is usually done with beech wood at a temperature that does not exceed 20°C. The golden rule states: little smoke, lots of pure mountain air. Smoking and air-drying steps alternate and the result is an exceptional product which is perfectly spiced and delicate at the same time.

The aging process lasts on average 22 weeks. While the legs age, a natural layer of aromatic mould develops on the surface, shielding the speck, preventing excessive drying and helping it develop its signature aroma.

Finally, branding. Only the best specks can be branded with the “PGI Speck Alto Adige” quality seal. Product specifications set specific rules concerning animal rearing, nutrition and slaughtering: only legs of Italian pigs that are cut according to traditional methods are allowed. Only specific spices can be used for the salting step, and only certain types of wood can be used to smoke the legs.

The magic of smoking: beef and pork tenderloin

Smoking is a common feature of all cold cuts from Trentino and Alto-Adige. It allows preserving and flavouring the cold cut at the same time; this technique, which nowadays is quite widespread, was apparently discovered by chance by cave men. As a matter of fact, as they lit the fire to warm themselves up, they noticed that the food hanging from the wall would change flavour and last longer. This technique is beyond traditional – it is archaic!

The type of wood used for smoking is paramount. Beech wood is the most commonly used for two simple reasons. Firstly, it is one of the most common local trees. Secondly, it does not burn very quickly, it releases little smoke and spreads a delicate aroma that does not alter the taste of food. Cold cuts and cured meats that were smoked with beech wood have a delicate, but long-lasting aftertaste that is particularly pleasant and special.

Two perfect examples of this process are pork tenderloin and smoked beef.

Tenderloin is the leanest pork cut and it is processed in a traditional way to obtain a unique taste and aroma. It is covered with salt and Alpine aromatic herbs (each manufacturer has a secret herb mixture recipe) and it is smoked with beech wood shavings and juniper berries and left to age in the Alps’ air.

Smoked beef is also covered with salt, smoked and air-dried. It has a signature, spiced taste and a very low energy content. Prime-quality meat, natural herbs, smoke and pure air can only lead to exceptional results.

Cold cuts and cured meats from Trentino-Alto Adige are delicacies from our country that are worth all our attention. Although speck is undoubtedly the most famous and beloved one, that doesn’t mean that the other ones should be overlooked. Appreciating the real value of typical products means appreciating the real value of a whole territory and its specialties, even the less famous ones. Today we are in Trentino, who knows where we will end up tomorrow…