Who says there’s only tuna in oil?

We basically already know everything about tuna in olive oil. We are used to putting it in sandwiches, salads, pasta sauces or on some “frisella” rusk bread.

If preserved in oil, it’s one of those kitchen wild cards that can turn a trivial dish into a real explosion of taste.

The greater amberjack, a prized fish

The greater amberjack is a pelagic fish, which means it lives in the open sea, far from the coast. It’s part of the Carangidae family and its largest specimen. It can reach two meters in length and up to 100 pounds in weight.

It lives in the Mediterranean Sea, in the Pacific Ocean and in the Atlantic Ocean, usually between 20 and 70 meters of depth.

Clearly amberjacks are not all the same. If you purchase a fish caught by angling and handcrafted in Italy and one that comes from an ocean fishing boat off the coast of India, you can not expect the same flavour.

But above all, it’s important to know that the environmental impact of this fish is very different and even more different is the effect it has on your health.

Ocean-going vessels engage in the devastating trawl fishing, currently the most profitable and the most polluting.

The cone nets reach the seabed and are dragged by the boat, destroying the ocean floor, corals, algae and posidonia. But this is not the “only” problem. The trawls catch everything, from young to adult fishes, hindering fish repopulation.

They also catch sharks, dolphins, cetaceans and turtles, which suffer an even worse fate. If they don’t immediately die in the nets, they are thrown back into the sea, where they may even die days later from the damages taken.

Regarding the Mediterranean, the largest trawler fleet is unfortunately Italian, a rather embarrassing data if we think about how deeply rooted the culture of healthy, ethical and sustainable fishing is in Italy.

And it’s not over. The nets used for this type of fishing are made of nylon, and do not think that fishing vessels have the slightest interest in disposing of them in the correct way.

Once worn out, they leave them in the ocean where they continue to wreak havoc for around 600 years, entangling fishes and degrading into microscopic pieces, until they become fish food. Hence, our food.

Currently, it can no longer be said that eating fish is good. Or rather, not all fish is as healthy as you think. In some areas of the ocean the waters are so contaminated with mercury and heavy metals that it’s not recommended to eat the fish that live there.

The Indian Ocean and the South Pacific are the worst, but the west coast of North America is no less.

The Great Pacific Garbage Patch stretches here, 80.000 tons of plastic waste that degrades at a very slow rate, turning into the even more dangerous microplastics, which are eaten by fish, and then by you. And guess what? Almost 50% of this waste consists of old abandoned fishing nets.

All this only to tell you one thing: read the label! 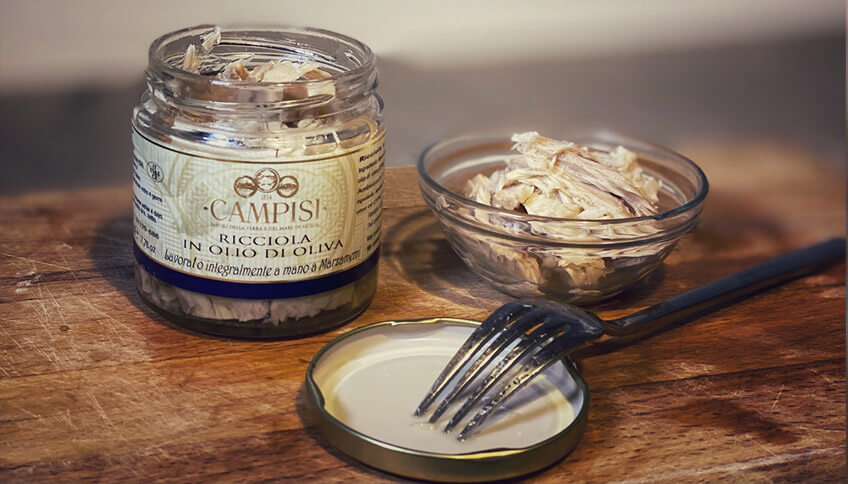 Campisi, flavours of the land and the sea of Sicily

Don’t you want to read the label? Do you want to be sure that you are buying a healthy, good and sustainable product? Very well, just choose Campisi’s greater amberjack.

Fishing by angling and handmade processing

Campisi produces lots of canned fish, amberjack but also tuna, anchovies, mackerel and swordfish. All in the utmost respect of the sea and tradition.

Only fishing by angling and never slaughtering, as well as careful and rigorous procedures for cleaning and packaging. Filleting is manual, cooking is delicate and steamed, to keep taste and texture intact.

Very well, do you now understand why a Campisi greater amberjack is so different compared to one from India? And also know that a good amberjack is perfect to create healthy, easy and delicious dishes.

Need ideas? Let’s stay in Sicily: try some busiate (a typical pasta from Trapani) with amberjack and dried tomatoes, the Pachino kind obviously, or a nice couscous with amberjack, eggplant and toasted almonds, a fresh, nutritious and delicious dish.

Another recipe that will surely appeal to everyone is for amberjack patties. Add the drained fillets to boiled potatoes, capers, parsley and an egg. Once you got the right consistency, make the balls, roll them in breadcrumbs and fry them in peanut seed oil.

Campisi’s greater amberjack isn’t just good, it’s also healthy, sustainable and super versatile in the kitchen. It is also a piece of our history, of the Sicilian gastronomic culture and of the art of doing things well.