Precious grains from the Vercelli plain

Raise your hand if you think that rice is a basic, trivial food. Did you know that rice is the main ingredient of diets from all around the world? And that its cultivation requires tremendous effort?

Of course there are many kinds of rice and we, as gourmets, have selected the best ever. It’s called Acquerello rice and today we get to know it in its homeland in the Vercelli plain, an enchanted place between dragonflies and herons.

The best Carnaroli rice in Italy

Carnaroli rice – born in Paullo in 1945 thanks to the crossing between Vialone and Lencino – is the best rice in Italy. And Acquerello rice is the best of them all.

Why? Because it does not overcook and the grain always remains solid, perfectly creamy but not too soft.

It is no coincidence that this year in May Acquerello rice became part of the Altagamma Foundation, an association that brings together the best Italian luxury brands in food, fashion, design, jewelry, hospitality and engines. So what was that? A “basic” food you said?

But how did rice end up with the most creative designers, the most gifted stylists, the most beautiful structures? And next to the Ferrari, just to name one…

The production technique of this rice is what makes it unique in the world and that’s a fact. But there’s more: the Colombara estate where it is cultivated, processed and packaged is a magical place, where technological innovation embraces the utmost environmental sustainability. 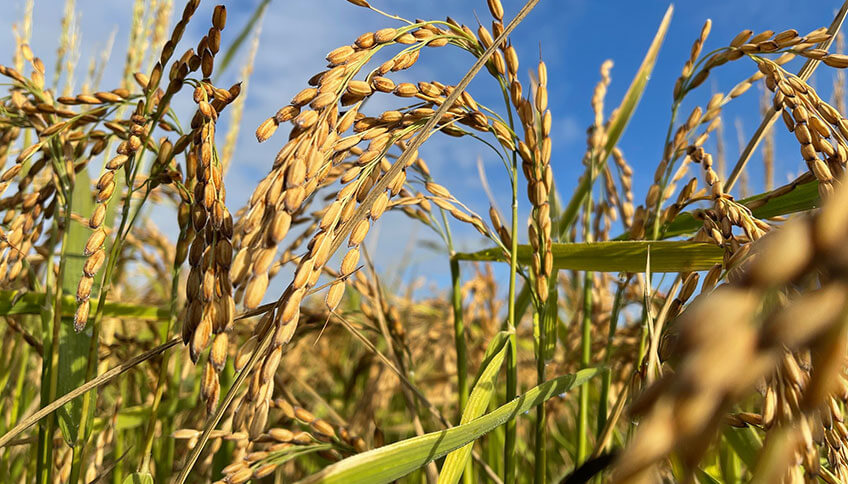 How is Acquerello rice produced?

Acquerello is THE rice for at least two reasons. First: we’re talking about a rice that’s aged for at least a year. Second: this is the only white rice in which the germ - the richest part in vitamins and microelements - is re-integrated to the grain.

The aging at controlled temperature

Let’s start with the aging process. Rough rice ages for at least one year in refrigerated silos at a constant temperature below 15° C. This way the starch has all the time to stabilize and during cooking it will not be released, which happens with low quality rice.

The aging process also increases the grain’s liquid absorption capacity. This is why risottos made with Acquerello rice are always creamy!

The re-integration of the germ

Let’s move on to the re-integration of the germ, a true technological innovation protected by an international patent. Unlike brown rice, white rice - except our beloved Acquerello - does not have the germ, which is the most valuable nutritional part.

Since 2004 the Colombara estate is the teaching site of the University of Gastronomic Sciences inaugurated by Slow Food. From this precious collaboration the dream of an exceptional rice was born, both for health and for the palate.

The rest is history. Today Acquerello rice is the only one in the world to offer this quality. A white rice with the germ, only the Rondolino have managed to do so.

Let’s also add: it takes 20 meticulously controlled steps to make Acquerello rice. The fundamental step is the helix, the best method to whiten rice through the rubbing of grains.

Last but not least, the packaging. Vacuum packaging and tin can, a perfect image strategy as well as the best method to preserve quality.

Colombara estate, the history of rice

Few places have really made the history of cuisine like the Colombara estate did. Here rice has been cultivated since 1400, when the estate went from a hostel for travellers to a centre of production.

By the end of the '500 rice became the soul of the territory. A small village developed around the estate, made of houses, taverns, shops. In the late 1800s the estate became a pole of attraction for workers - especially female workers - from the whole plain, so much so that in 1920 a dormitory was built for seasonal rice paddy female workers (the so-called “mondine”).

Let’s pause the story for a moment, because the “mondine” dormitory deserves all our attention. Everything has been preserved as it was to offer visitors a clear memory of tradition: the beds, the clothes, the mondine’s suitcases.

Who doesn’t understand why it’s so meaningful to tell the story of the women who were behind a gastronomic excellence, maybe doesn’t deserve Acquerello rice at all. It is not just food, but a piece of our history, made of hands in water, sunburnt faces, broken backs, songs to sanction a new sorority.

1935 is another pivotal year. Cesare Rondolino becomes the owner of the estate and carries on the cultivation of different varieties of rice. His son Piero joins him in 1971.

In 1991, a historical turning point for the company: Piero decides to entirely dedicate himself to the cultivation of Carnaroli rice and this is where the Acquerello brand is born. Since 2002, technological innovation has been an integral part of the company. The re-integration of the germ, an element that makes Acquerello rice one of a kind, is patented.

Let’s just say that, with such a product, any recipe you decide to prepare will be a masterpiece. Whether you go for a classic Milanese risotto, for vegetarian versions – such as yellow pumpkin, artichokes, zucchini, mushrooms or whatever vegetables are in season - or choose to pair it with fish, you can rest assured.

Acquerello rice is so good that the rest is just seasoning.