A JOURNEY THROUGH ITALIAN PASTA REGION BY REGION

How many pasta shapes exist in Italy? Around three hundred! Any pasta shapes that you can think of has been created over the years and combined with a specific sauce. First of all, Italian pasta shapes are divided into two main categories: long-length and short-cut. Then they can also be sorted according to the type of surface, whether they are dried, stuffed etc. Each region has given free rein to its creativity, helping to shape a one-of-a-kind culinary and cultural landscape.

FROM THE HOUSEWIVES’ KITCHENS TO THE LARGE RETAIL SECTOR

In the ‘50s Italian people used to spend their evenings watching a TV show called Carosello. At that time Giorgio Albertazzi used to tell the story of Italian pasta; he would visit the homes of housewives to see how they cooked typical pasta shapes of their region, which you could find for the first time in the large retail market.

Now everything has changed; we can find many different pasta brands, whose quality often varies according to price. This great range of pasta is the result of both marketing choices and attempts to preserve traditions; therefore, we can now all enjoy pasta whichever way we like and can change pasta shape way more often than we could back in the days, when pasta was only homemade.

Long-length pasta is then divided into wide pasta, such as lasagne or pappardelle, and thin pasta, such as tagliolini. Or it can be round-shaped, like spaghetti, or square-shaped, such as linguini; lastly, you can find hollow long pasta, such as bucatini or long ziti.

Short-cut pasta includes many shapes of fresh stuffed pasta as well as new innovative types of pasta. Pastina is a small short pasta type which is usually eaten with soups.

And what about the pasta surface? Italian pasta can be smooth, rough or ridged; each surface type goes well with specific sauces.

By combining all these features, a wide range of pasta shapes was created; all these shapes are deeply tied to local traditions of each Italian region. Crafted in the housewives’ kitchens from the North to the South, from the East to the West of our country, each traditional pasta shape is forever linked to typical dishes of every region. 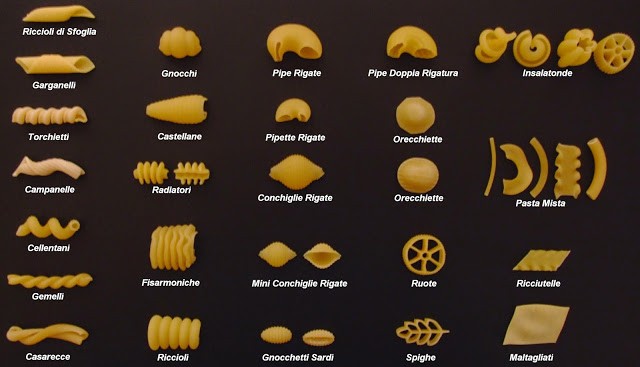 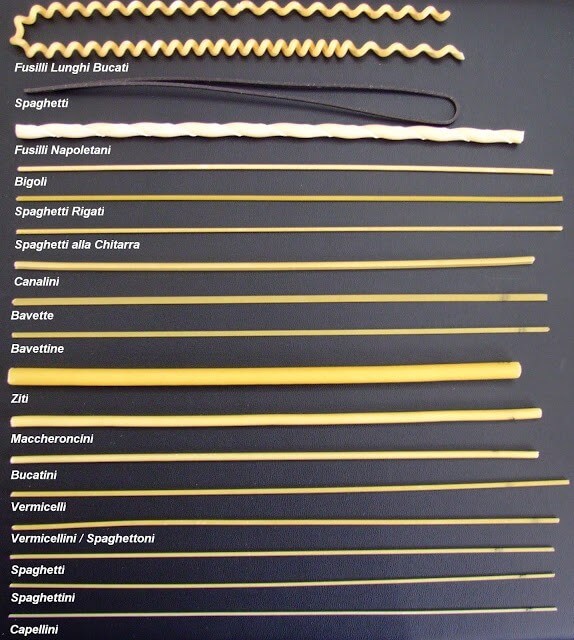 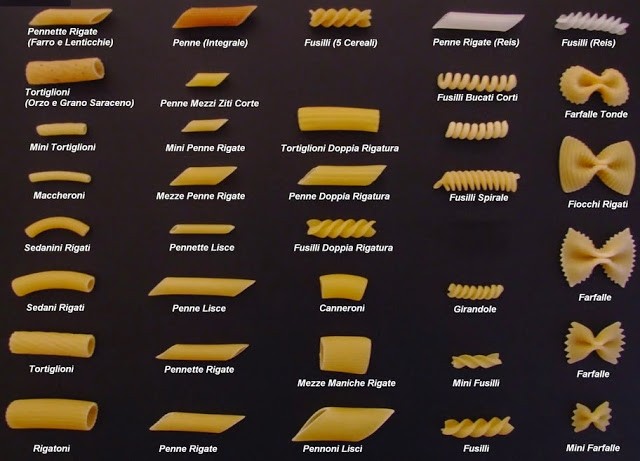 This region is home to Spaghetti alla chitarra, a type of egg pasta made using a traditional tool called ‘chitarra’ (literally guitar). The dough is pressed onto the ‘strings’ with a rolling pin; the result is very porous square-shaped spaghetti which go perfectly well with a rich sauce, such as for instance meatballs.

This is definitely one of the best regions for pasta variety. How can we not think straight away of the amazing pasta from Gragnano? In Campania, in the South of Italy, there are many traditional pasta shapes which can be combined with tomato or fresh fish sauces. Vermicelli, mafalde, scialatielli, paccheri, rigatoni, ziti and fusilli are the most famous pasta shapes from Campania.

This Italian region is the homeland of stuffed pasta and egg pasta. Long-length pasta from Emilia-Romagna - such as fettuccine, tagliatelle and lasagna - is rooted in centuries-old traditions: women from this region crafting this pasta shape are called ‘sfogline’ and they are internationally renowned because of their excellent skills in rolling out the pasta dough, until it has reached the perfect thickness off to the nearest millimetre. Stuffed pasta also comes in many different forms: tortellini, anolini, ravioli, tortelli and tortelloni. The pasta is stuffed with local delicacies, such as Mortadella, Parma ham and Parmigiano Reggiano cheese.

When we are thinking about pasta from Latium, we think straight away of bucatini all’amatriciana. They were already world-renowned prior to the tragic earthquake that shook the city of Amatrice; now we can say that they have brought together a whole nation. Bucatini is a hollow long-length pasta with a smooth surface: remember to tuck your napkin into your shirt like a bib when you eat them! Amatriciana is the sauce that best fits this pasta: pork jowl, tomato sauce and grated pecorino cheese.

Kissed by the sun and the sea, this region offers some pasta shapes perfectly complementing its most traditional sauce: Ligurian pesto. That’s how long-length pasta shapes - such as bavette, linguine and trenette - were born, as well as short-cut pasta such as trofie, a fresh pasta without eggs with a twisted form resembling wood shavings.

We absolutely adore pizzòccheri, a typical pasta variety from Valtellina made with buckwheat flour. This particular flour has a very distinctive flavour which pairs well with stewed Savoy cabbage, potatoes and fontina cheese, like the traditional recipe states. An absolute delicacy!

In the homeland of truffle, the tagliolini pasta shape reigns supreme. This fresh egg pasta must be rolled out very thinly and cut into strips with a maximum width of two millimetres. Egg pasta from Piedmont has a very particular feature: it uses a different proportion of ingredients. As a matter of fact, to make egg pasta you would usually use 60-70 grams of egg each 100 grams of flour. In Piedmont they sometimes use three times the amount of eggs! Another type of pasta worth mentioning is agnolotti, a stuffed egg pasta. The most famous ones? Agnolotti del plin filled with roast or stew: a recipe originally made with leftovers, which turned out remarkably delicious.

This region offers fresh short-cut pasta made with local durum wheat semolina: orecchiette, cavatelli and troccoli. The most famous recipes? What about orecchiette with turnip greens or cavatelli with tomatoes and salty ricotta… as perfectly simple as it gets.

Gnocchetti, stuffed gnocchi, fregola: this region has many small and tenacious pasta shapes which often need to be cooked for a longer time and which go perfectly well with fish sauces or bean soups.

In this region durum-wheat semolina pasta reigns supreme. This is also the homeland of spaghetti: dressed with tomatoes - of one of the many delicious local varieties -, clams, olives, capers and oregano from Pantelleria. Then there is busiate, a regional pasta shape created in Trapani, which looks like long maccheroni. The name comes from ‘busa’, the stem of a local plant which is used to make the pasta.

The region of Veneto is famous for its bigoli. Bigoli is a long pasta shape reminiscent of big spaghetti, with a very rough surface perfectly holding onto sauces. As it often occurs, there are many different versions of this pasta shape: one of them entails the addition of an egg in the pasta dough.

Have you ever tasted the egg mezzelune pasta stuffed with herbs and ricotta and dressed with a lot of melted butter, chives and cheese?

A typical pasta shape from Umbria is strangozzi, a fresh egg pasta with peasant origins, like many other pasta types. Strangozzi were born in the kitchen of housewives who still today roll out the dough by hand until it reaches a width of 2mm and then cut it in strips around 3-4mm long, which look like shoe strings.

Besides from many typical local pasta shapes, this region is also renowned for its gnocchi, made with potatoes or pumpkin. A typical pasta from this region is called cjarsons, stuffed with either eggs or potatoes. They are particularly common in the Carnia area and they look like ravioli, but their stuffing perfectly combines sweet and salty flavours and is made with raisins, cocoa, rum, ricotta cheese or herbs.

Pasta in the Aosta Valley:

Chnéffléne from the Aosta Valley are tiny gnocchi made with flour and eggs and “grated” with a specific tool directly on boiling water. They are dressed with rich sauces with stewed onions and butter, such as tradition dictates.

The most famous pasta type in Molise is cavatelli, made from durum wheat semolina and water. Their story dates back to the reign of Frederick II who was particularly demanding in terms of food. Cavatelli have an elongated shape and are handmade by gently pressing the pasta with the index and middle fingers, thus making it hollow so that it can perfectly retain sauces, mainly ragouts or veggie sauces.

Pasta in the Marche:

The cuisine from the Marche likes strong flavours and simple ingredients. Even though they also have roots in Emilia-Romagna, passatelli are pretty common in the Marche. They are often called lumachelle in this region; they are little rich cylinders made with Parmesan cheese, breadcrumbs, eggs, flour and nutmeg. They might not be an actual pasta shape, but they are one of the most common pasta dishes in the region; they are usually eaten in capon broth or made by adding spinach in the dough.

This region has a bounty of handmade fresh pasta, especially short-cut pasta made with a simple dough of durum wheat semolina and water. Orecchiette and cavatelli are pretty common here, but a typical pasta shape from Basilicata is ferricelli, a type of fusilli rolled out by hand, which is rather elongated (around 20cm) and usually dressed with rich pork sauces.

The culinary landscape of the region Calabria includes many typical pasta shapes closely linked to local cuisine traditions, such shtridhelat, rascatielli or calandreddi - all exclusively handmade. One curious thing is that Calabria has very few stuffed pasta types, but this one very rich type - Sagne chjne - makes up for it. They are lasagne which include between each layer of pasta artichokes, mushrooms, meat, aromatic herbs, caciocavallo cheese, pecorino cheese and hard-boiled eggs.

After this long trip, let’s actually prepare and enjoy a nice dish of pasta!