Cheeses from alpine pastures stand out among all Italian cheeses because of their unique flavour, where the fragrance of forage herbs from the mountain pastures reigns supreme.

We are at the top of the Italian peninsula, where the Alps’ peaks rise above 4,000m. Nature up here is pristine. Gentians, bluebells, clovers, rhododendrons and Alpine herbs lend the milk, and hence the cheese, an unmistakable flavour. 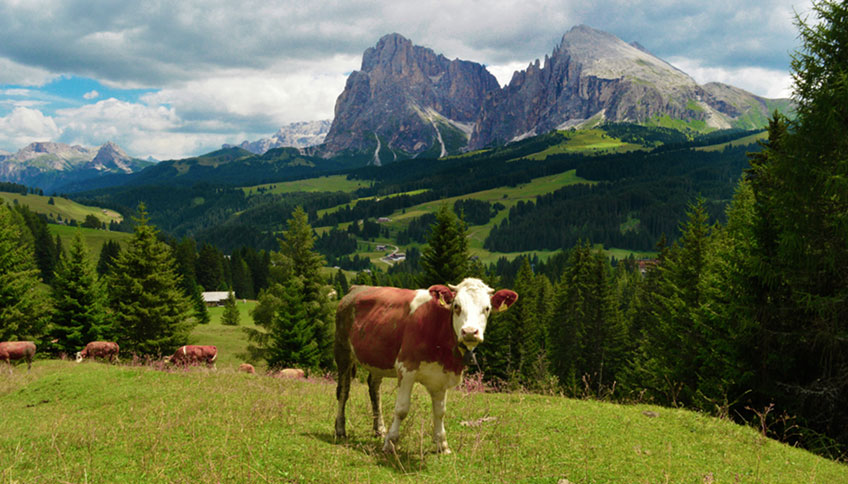 Around mid-June, mountain pasturing begins and cows start climbing the Alps’ slopes. As a matter of fact, in the summer time herds graze freely in upland fields rich of flowers and scented herbs close to the mountain cabins called shielings.

It is more than a simple routine; it is an actual ritual. After having spent the winter in the stables and being fed with hay, cows now graze in much tastier, upland fields.

Seasons change and rhythms shift, even for herders and cheese makers. Living in the shielings is not easy: one has to wake up before sunrise, move hundreds of cows to the pastures in the morning and back to the shieling in the evening and milk them twice a day.

Mountain pasturing marks the beginning of the hot season, as well as the transhumance means that cows and people are coming back down to the valley. As days start to shorten and the temperature decreases, it’s time to leave the upland pastures.

A gem among many an Italian cheese. Castelmagno d’alpeggio alpine cheese is only made in the summer time and only in alpine pastures that are located above 1,600m. Free-roaming cows eat what nature gives them – no industrial feed or silage is allowed.

It would be ideal if every herder were to only use milk coming from his/her own cows, as is the case with La Meiro. Their Castelmagno d’alpeggio cheese is an absolute delicacy and was awarded with the Oscar for the best Italian mountain cheese at the Italian Cheese Awards.

What is their secret? First of all, the milk that is so extraordinary that is processed when it’s still raw, following traditional methods. Processing requires quite some time, but it’s worth the wait.

It all starts when, right after milking, calf rennet is added to the milk. That’s how the curd forms, which is then broken into grains that are as big as corn kernels. After a short stay in the boiler, the curd is extracted and put onto a cloth, where it will lay for at least 18 hours to drain off all excess liquid.

Once it’s ready, it is placed in special containers and plunged again in the previously used whey for at least a couple of days. Afterwards, it is cut again into cubes, minced, salted, put back in the containers and pressed. Ageing begins now. The cheese ages for at least 60 days, although the best cheese wheels are left to age for much longer.

La Meiro makes many cheese wheels that age in natural caves with a constant temperature of 10 °C and a humidity level of 90% all year round. This cheese has obtained the PDO label and is part of the Slow Food Presidium, so it is a cheese like no other.

Its flavour is sapid with intense floral hints. The layer under the rind has a more intense flavour than the core of the cheese and it may become creamy or even blue. This cheese pairs extremely well with linden honey and it tastes amazing on gnocchi, polenta and risotto.

We are now in the Aosta valley, a region full of pastures and cows. Fontina cheese obtained the PDO certification in 1995 and its production has significantly increased ever since. Each year 400,000 cheese wheels are made, including the Fontina d’alpeggio which is only made in the summer time, when cows graze in one of the 200 Alpine pastures recognised by the relevant Consortium.

Processing is, once again, long and carefully carried out. Raw milk turns into curd, by adding calf’s rennet. Once the curd has been cut, it is cooked at 48 °C and then it’s time for the curd extraction and drainage.

The cheese paste is put in special moulds and it is pressed to drain off all excess whey. Once it’s ready, ageing begins; the relevant product specification states that ageing must last at least 80 days. During the first 30 days, cheese wheels are continuously salted and brushed; by doing so, the rind obtains its signature orange colour. Cheese wheels age on European spruce tables in natural caves, where the temperature never exceeds 15 °C and the humidity levels never drop below 85%.

At the foothills of the Mont Blanc, we find the most delicious Fontina cheese. Caseificio Panizzi dairy is located in an extraordinary natural environment and its cheeses are as equally extraordinary. This Fontina cheese is simply perfect. It is intense and aromatic with commonly-found irregular eyes; it tastes like mountains, nature and precious traditions.

Italian cheeses are countless; cheeses from Alpine pastures are the most connected to nature’s rhythms and the cycle of seasons. Alpine pasturing and transhumance are thousand-year-old rituals that should be protected and safeguarded.