Pecorino Romano cheese is one of the food symbols of our country. It is one of the most exported Italian cheeses abroad; it is mostly exported to the USA which amounts to 70% of total exports. In the month of June 1996, this delicious hard cheese, made from whole sheep’s milk, obtained the Protected Designation of Origin.

In between Rome and Sardinia

Pecorino Romano cheese has very ancient origins; it was even mentioned in some written works dating back to Ancient Rome. Cato the Censor (234 BC - 149 BC) mentioned this sheep’s milk cheese in his work De Agri Cultura and Virgil wrote in 49 BC that each Roman soldier would eat 27 grams of Pecorino cheese per day. Lucius Junius Moderatus Columella (4 AD - 70 AD) described the techniques used to make this Pecorino cheese in his essay De Re Rustica, making it the first product specifications of this cheese to ever be written!

Nowadays, according to Pecorino Romano’s product specifications, the area of origin of milk encompasses Sardinia, Lazio and the province of Grosseto. Lambs supplying the rennet as well as the starter cultures used for this cheese production must also come from these areas.

Although most of production takes place in Sardinia, there are still some manufacturers making Pecorino where it originally comes from, i.e. the Tiber valley. The company Casearia Agri-In works with the brand Deroma to make a truly Roman Pecorino Romano cheese. As a matter of fact, milk is sourced locally and each production step takes place in the province of Rome.

How is Pecorino Romano made?

Let’s start from milk: sheep of the Sarda breed are reared in a wild state and graze on uncontaminated pastures full of aromatic herbs. Behind an excellent cheese there is always an excellent milk, just like this one.

Once it has reached the processing facilities, the milk is weighted and filtered and it can be processed either raw or be heated to maximum 68 °C for no longer than fifteen seconds. This process is called thermisation and should not be mixed up with pasteurisation which actually changes the milk’s sensory features.

The milk is then poured into coagulation tanks and this is where the magic happens. During this step, the so-called “scotta-innesto” is added. What is it? It is a natural starter culture made of local thermophilic bacteria that the expert cheese-maker makes on a daily basis according to a century-old tradition.

Then it’s time to add the rennet, which must be a lamb rennet paste. The temperature is brought up to 38 °C - 40 °C and the milk curdles. When the curd has obtained the right consistency, the cheese-maker breaks it into grains as small as wheat grains.

Then it is time to cook it at no more than 48 °C. Once it’s ready, the cheese paste is pressed to get rid of excess liquid and then it is put into cylindrical moulds in humid hot rooms. Once it has cooled down, the cheese is marked, which is a very important step, since marking guarantees quality. The logo includes a dashed diamond shape with the head of a sheep; the PDO mark and the manufacturer information are stamped on the whole cheese heel with a special stamp.

Then the salting occurs; the cheese is either dry-salted, following traditional methods, or brined, for at least seventy days. During this process, the cheese lies in humid rooms with a temperature of 12 °C and it is then moved to less humid and colder rooms, at a temperature of around 10 °C. Moreover, salt is applied on the cheese wheels at least three or four additional times, in order for the cheese to reach the perfect sapidity and aromaticity. 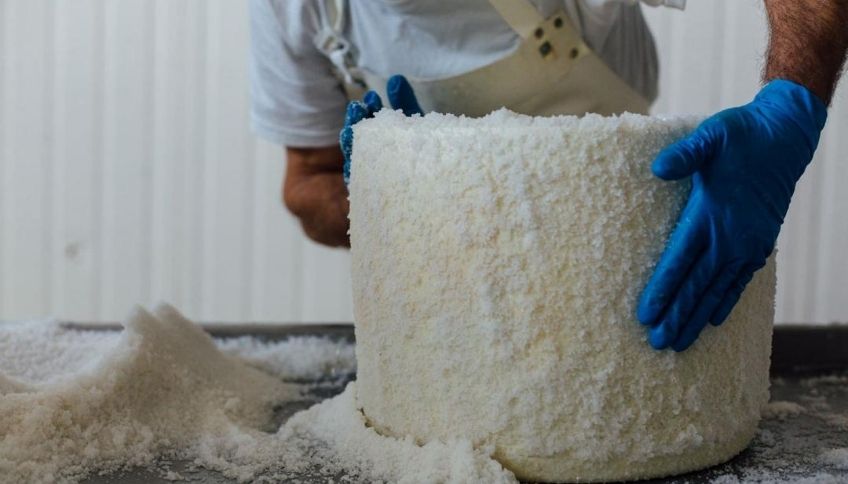 Pecorino cheese wheels are cylindrical and pretty big; they are 40 cm high and 35 cm in diameter. They weigh around 20 to 35 kilos. Apart from the PDO logo, the wheels should be marked with the province of origin, the manufacturer code and the production date.

The Pecorino Romano rind is thin and it can be either ivory white if it’s left au naturel or black if it is coated. The Pecorino Romano is usually coated with a black layer; originally, the black coating was made from clay, grape seed oil and charcoal; today, wax and natural colouring agents are also allowed.

The paste is white, hard and compact and there are almost no eyes. The scent is unmistakable, the flavour is enveloping, the taste is very intense, aromatic and it gets more sapid as ripening progresses.

If the Pecorino has not aged long, it tastes amazing with broad beans and pancetta, but this cheese is mostly used as a grate cheese. It can be found in most dishes belonging to Roman traditional cuisine: Tonnarelli pasta with cheese and pepper, Bucatini all’amatriciana, Spaghetti Carbonara, Pasta alla Gricia.

The Roman-style tripe is made with Pecorino Romano cheese, which is also scattered on Roman-style Gnocchi. An unusual - but delicious - way to eat it is on top of Spaghetti with mussels, and it can replace Parmigiano cheese in meat and veggie fillings to obtain a more intense flavour.

Or you can simply grate a copious amount of Pecorino Romano cheese on pasta with tomato sauce to take your dish up a notch!