Years go by, times change and the world is not like it used to be. There is only one certainty in the chaos of modern life: on Christmas day, we eat Tortellini.

Even if the sky is falling down, on the 25th of December there will always be a steaming bowl of fresh Tortellini on the table. Grandmothers used to make them, one by one, and they would arrange them in tidy rows on the sitting room table, covered by a cloth so as not to dry them out.

Defining it as a ritual is an understatement. The whole family would take part in this Tortellini feast. Grandfathers used to go fetch the eggs from the farmer who knew his hens so well that he called them by name; aunts would go buy the meat and we kids could only hope to make, at the very best, one Tortellino each.

We would even stand in a perfectly organised line, while anxiously waiting to make the perfect shape, fill the dough with the filling and seal the corners by pressing the dough with our fingers.

It was a memorable, but very stressful, moment, and because our cousin was on our back and our grandmother would judge us mercilessly, our Tortellini, for whatever reason, always ended up looking botched.

Hers were, on the contrary, just perfect. Small, full, round, they all looked incredibly the same. How did she do it? She set the bar so high that anyone who tried her Tortellini – and I mean anyone in three generations – didn’t even dare to try to replicate them.

Tortellini? I’ve often eaten them, I’ve never made them. The comparison would be too brutal. However, do not think that I don’t enjoy Christmas as much.

That’s right; there are many readymade, fresh Tortellini. However, there are only few good ones and even less exceptional ones. But don’t worry, we have found them and since we are kind, we want to share them with you all.

So that you can properly celebrate Christmas with your family and enjoy a dish that is a pillar of the best Italian cuisine, but with no stress whatsoever. 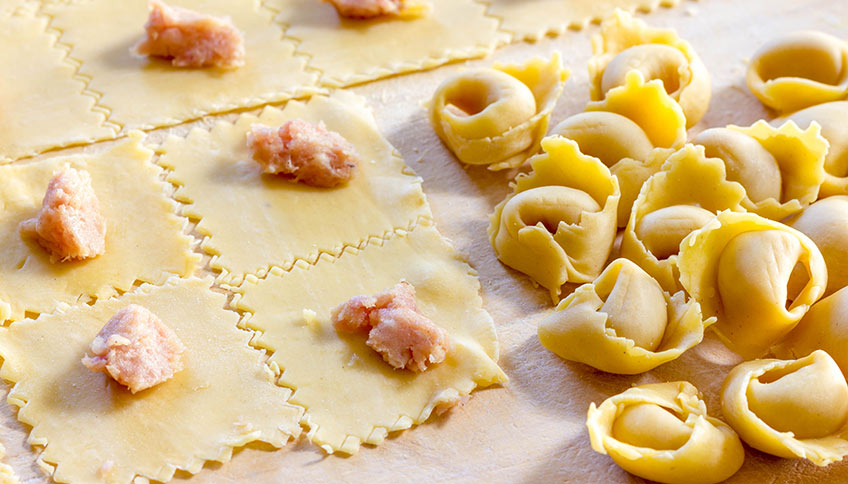 You are probably wondering what’s so special about Castelfranco nell’Emilia. Don’t you know the legend of Venus’ navel?

It was the year 1325 and the land of Emilia was home to one of the most ruthless clashes between Bologna and Modena, the battle of Zappolino. The story tells us that the reason behind this battle lied in the ancient clash between the Ghibellines from Modena and the Guelphs from Bologna.

However, Alessandro Tassoni, a writer from Modena who lived between the 1500s and the 1600s, gave us another point of view in his mock-heroic poem “La Secchia Rapita” (The kidnapped bucket). He said that all began when people from Modena stole an old, pierced bucket from Bologna.

And given the pivotal importance of this confrontation, Venus, Bacchus and Mars couldn’t do anything but join the battle.

At one point, they had to go to sleep and the legend narrates that the three gods chose the Corona inn, in Castelfranco nell’Emilia. The morning after, Bacchus and Mars left, while Venus was still asleep.

The curious, and somewhat voyeur, host approached the naked Goddess and caught sight of her gorgeous navel. It was love at first sight. He was so bewitched that he ran to the kitchen and tried to replicate that perfect knot, using a small sheet of egg dough.

Was it Venus? Did the inventor of Tortellini really take inspiration from the female navel? Does that really matter in the end? Shouldn’t we just simply thank whomever came up with such a flavourful masterpiece?

Tortellini are a serious matter in Bologna and close-by areas. So serious that it is almost sacred. That’s why in October 1965 the “Dotta Confraternita del Tortellino” (Tortellino association) was founded with the motto “In studio - in mensa - Bononia docet” (in term of study and food, Bologna rules); Bononia is the Latin name for Bologna. Please do not tell the members of this association that people from Modena can make Tortellini, too.

In 1974, the association lodged with a notarial deed the original recipe for the filling of Tortellini from Bologna, which was then completed in 2008 with the recipe for the egg pasta and the broth.

Fresh pasta should look very yellow and contain one whole egg for 100g of flour. The filling should include: pork loin seared in butter, dry-cured ham, real Mortadella from Bologna, Parmigiano Reggiano cheese, eggs to bind everything together and a generous amount of nutmeg.

For the broth: celery, carrot, onion, beef and one half of a free-range chicken. There are alternatives to the broth (have you ever tried the truffle broth?), but you risk some serious scolding.

Choosing the right ones

The problem is: if I don’t want to make Tortellini myself, but I still want to eat Tortellini as delicious as that of my grandma, what do I do?

Finding the perfect manufacturer wasn’t easy, but I managed to, in the end. I found the real fresh pasta from Bologna, handmade with the best local ingredients. 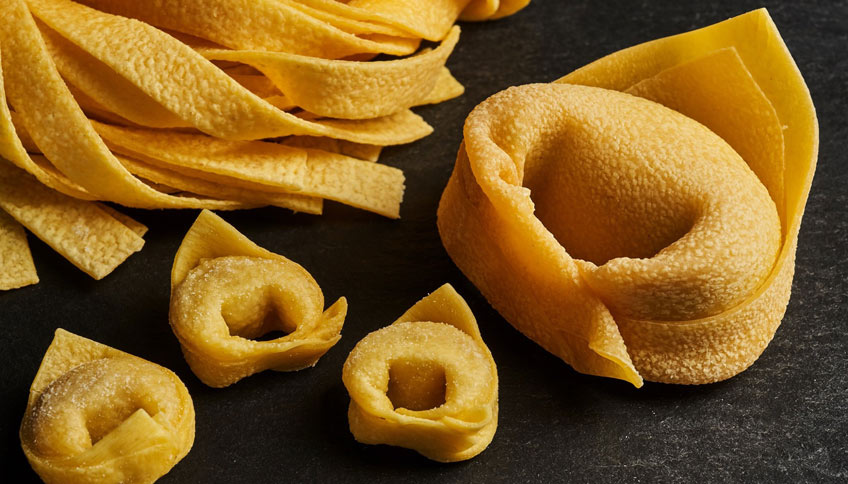 I’m talking about Gratifico’s fresh Tortellini, which embodies the art of making Pasta in Bologna. The eggs are free range, Mortadella has a PGI label, Parmigiano Reggiano cheese has been aged for more than 30 months.

They are not made by me, but that’s even better. Grandma, please be patient, I’m not good at making Tortellini, but I’m very talented at looking for excellent delicacies. And your Tortellini have taught me how to look for the best ones.