Let’s talk about cold cuts today, but not random cold cuts, but rather the exceptional and most famous cold cuts from Lazio. The most renowned cold cuts are, of course, Coppiette pork jerky and the Corallina salami that is so well loved that people even eat it for breakfast. Then, there also is the Ventricina salami which is also commonly eaten in the Abruzzi and Molise regions, and it is obvious why it is so widespread.

Making a great salami is not easy at all. Choosing the meat cut, finding the right balance between spices and aromas, filling the meat mixture in casings, aging: all these production steps are quite hard to implement. Luckily, there are still some manufacturers that respect tradition and strive to make genuine products.

One manufacturer stands out among many others: Salumi Bisesti. This company combines the greatest innovation in its modern facilities located in Pomezia with traditional processing methods and old flavours and scents reminiscent of days gone by. Only Italian pork is used, which has been strictly selected to reach the highest quality standards.

Let’s set out to discover the best cold cuts from Lazio, a flavour-packed heritage. Are you ready?

Making a virtue out of necessity; that’s why this product was born, to avoid throwing away meat that could potentially spoil. The meat is selected – only lean meat cuts are used – and carefully trimmed, then it is flavoured with spices and aromatic herbs and left to dry out.

Coppiette pork jerky used to be made from horse meat, when a horse could not work in the fields anymore. Then sheep meat was used and more recently, pork, but the founding principle is still the same: nothing is thrown away.

Dried meat lasted for a longer time and was a nutritious snack or lunch that farmers, shepherds and soldiers could easily carry around. Coppiette pork jerky was also extremely popular in inns.

Innkeepers were allegedly the ones that first started to season the meat with aromas and chili pepper. That actually makes sense, since spices, salt and chili pepper make people thirstier and therefore, more likely to order another round of red wine.

Nowadays, Coppiette pork jerky is eaten as a starter or snack and it is suitable for both restaurants and as street food. It is a homage to the most authentic and genuine tradition from Lazio.

Let’s start by explaining the name. Corallina comes from corallo which is how the casing containing the meat mixture is called. It comes from the first section of the pig’s colon, bearing the same name, which has unique properties making it ideal to preserve meat without jeopardising neither the flavour nor the aroma.

Corallina salami has an old story. It was once only made for Easter but nowadays, it can luckily be found all year round. In Rome it still is a must at Easter, when people eat it for breakfast with a cheese pizza. Corallina salami and cheese pizza are one of the region’s most famous duos.

Corallina salami belongs to the traditional, regional agrifood products (PAT Italian quality label) (article in Italian) of the region of Lazio. Corallina is surely made, by employing “processing, preservation and aging techniques that have developed over time and that are consistent throughout the relevant territory and it has been made according to traditional techniques for at least twenty-five years”, as the definition of a PAT product states.

It is made from fine meat cuts – shoulder, ham and loin – that are finely ground and mixed with dices of fat. The meat is flavoured with spices and aromas and the salami is then left to age for around 2 months in well ventilated cellars. It has an enveloping scent and a unique flavour – it is a real treasure among all Italian salamis.

Ventricina salami is not only common in the Abruzzi or Molise regions. This salami mixture is filled in the belly (ventre in Italian, hence the name), which is a particularly elastic and resistant part of the guts.

Fine meats cuts with the right percentage of fat (ham, loin and belly) are roughly ground. Then the curing mix containing salt, aromas, spices and chili pepper is added, along with the fat. Everything is mixed well and left to rest and finally, filled in casings. After being tied, the salami is left to dry and then to age for 3 to 7 months. 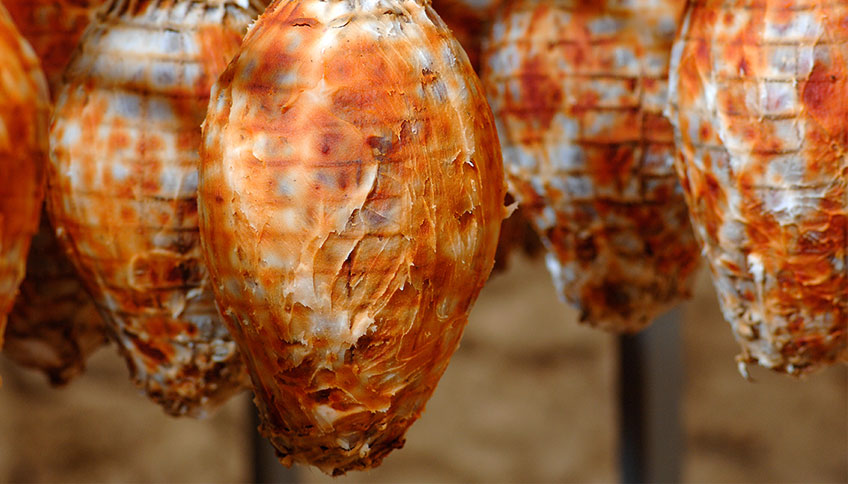 Ventricina spicy salami has a strong and intense personality. One should be able to feel the spiciness given by the chili pepper, but a high-quality product should definitely not be overpoweringly spicy, but rather have a good balance between the flavour of the meat, the spiciness and the aromas, which is actually very hard to achieve.

Ventricina tastes amazing on its own, in a sandwich or on a platter paired with cheeses and vegetables packed in oil. It also tastes great on pizza, since it becomes perfectly crunchy when it is baked.

Corallina salami, Coppiette pork jerky and Ventricina salami are typical cold cuts from Lazio that you can enjoy during a trip to the Roman castles. Actually, you are in luck: we can send them to you everywhere in the world!