Mortandela: the story of a delicacy

Mortandela is a product that tastes like the mountains. One slice is enough to go on a journey to the Non valley where, between apple orchards and castles, tradition and craftsmanship reign supreme.

Be careful, though, since its name could be misleading. No, we are not talking about Mortadella from Bologna, we are talking about an altogether different product.

These two products probably only have the origin of their names in common: it stems from the Latin word mortarium which means mortar, the tool used to mince the meat. Actually, some people think that they don’t even have that in common, since Mortadella would come from myrtatum, myrtle in Latin, which was a spice used to season the meat before filling it in casings.

How did Mortandela come to be?

Let’s get to the point. Mortandela has a truly unique story. It starts off with some peasants buying a piglet at the Fair on All Saints’ Day on the 1st of November. The piglet was fed with bran, potatoes, hay and vegetable scraps.

Then, on the following December, the slaughter would take place. They would make Speck, Coppa (pork neck cuts) and Pancetta (belly fat), using the finest meat cuts. What was left over was used to make Mortandela.

Pork jowl, heart, lungs, tongue and liver: as we all know, in the pork we use everything but the oink. These meat cuts and trimmings were pressed in the mortar, seasoned with pepper (only a little amount, since it was very expensive), cinnamon, garlic and carnation flowers.

Then, the peasants would give a shape to the mixture. They would take “meatballs” weighing around 200g each and they would press them one by one by hand, slightly flattening them, and then they would envelop them in caul fat.

The meat wasn’t filled in natural casings, which were used for finer sausages, but it was enveloped in the less refined caul fat, which is a netting made of fat veins that keeps the guts in place. It isn’t really inviting, but you will change your mind, once you will taste it. Yes, you eat everything in the Mortandela, the meat and the casing!

Mortandela has always been a small sausage with a big taste. Guess why! Well, it’s easy. Peasants, shepherds and herders could carry it in their sacks and have an energy-packed and tasty food always at their fingertips.

How is Mortandela made today?

Nowadays, Mortandela is only made using the finest pork cuts, such as the shoulder, the belly fat, leg trimmings and neck. Spices are added to the minced meat: pepper, cinnamon, pimento, coriander and garlic are the usual choices.

Once the meat mixture is split into “meatballs”, which is still today carried out by hand, the Mortandela is enveloped in caul fat which had been previously soaked in lukewarm water and left to dry on wooden boards.

It is time to smoke it with beech wood and juniper berries as per tradition. The smoke aroma permeates the meat and makes it even more flavourful, intense and aromatic.

And that’s not all, since the meat is then left to age, from one week up to two months. The less it ages, the softer it is, but when it ages longer, the meat becomes more compact and fuller of aromas.

Aged Mortandela, unlike the fresh kind, is usually not used for cooking. The best way to savour it is just the way it is, by itself or as part of a cold cut platter. A typical Trentino starter platter would be aged Mortandela, Puzzone di Moena cheese, sweet-and-sour pickles and a nice glass of Teroldego.

On the contrary, fresh Mortandela is ideal on the grill, together with local potatoes omelettes, called tortei.

It tastes amazing with polenta, too, and with sauerkraut, but the most traditional flavour combination is with cooked dandelion greens. It can be used to kick the flavour of soups and risottos up a notch and it is a must in the classic barley soup from Trentino. 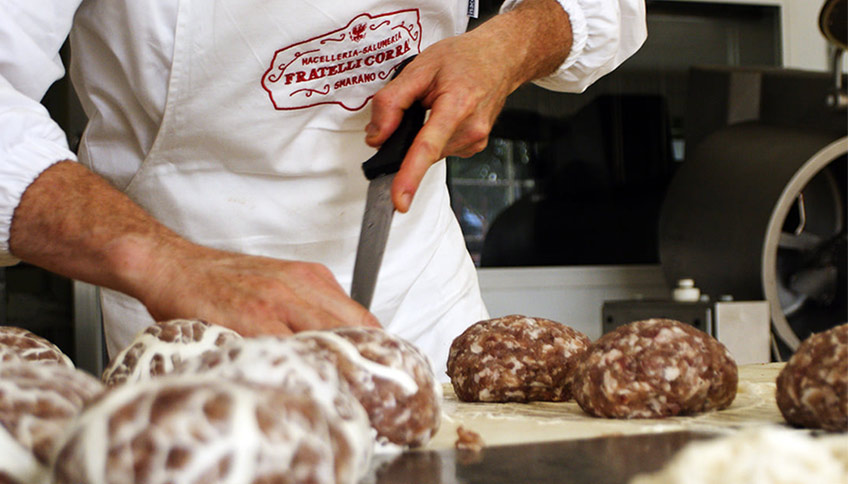 Now we know what Mortandela is and how it is made, its story, tradition and how it is used in the kitchen, so let’s move on to how we selected the best one.

For our assortment, we have selected the Mortandela by the company Fratelli Corrà, which has been making delicacies since 1850. They are located in Smerano in the heart of the Non valley, at an altitude of 1,011 m which is, incidentally, a higher number than the number of inhabitants.

It is the oldest sausage manufacturer in Trentino and it is a business that has been passed down from father to son for 5 generations.

What is the strength of this company? The fact that they own a slaughterhouse. Strictly selected, local meats are processed in their own facilities and turn into typical, exceptional mountain sausages.

It is a family tradition, recipes that have been passed down, manual processes. Trentino, whose cuisine is characterised by typically Italian, as well as Austrian and German flavours, is celebrated with its best specialties.

We have selected, among all these specialties, the pride and joy of Fratelli Corrà, the smoked Mortandela Roen Reserve, which is manufactured in limited quantities, processed by hand and aged for 40 days.

Mortandela from Trentino is not only a sausage with an old tradition, it is the actual tradition of sausages. From reusing scraps of pork meat to creating a fine and sophisticated product – that’s how our ideal cuisine is like.