Nougat from Cremona: the story of a Christmas classic

When we say nougat, Jingle bells immediately pops in our head and there isn’t a scent that reminds us of Christmas more than this soft mixture made of honey, almonds and egg whites. But what is the story of nougat from Cremona? Where did it originate? And why is it only eaten at Christmas time?

Let’s get one thing straight: almonds mature between August and September, but then almond husks are removed and almonds are left to dry. So, they are ready more or less by November and Christmas desserts are, of course, the firsts to benefit from these delicacies.

That’s why nougat has always been historically linked to Christmas, but I don’t get why people would not enjoy such a delicacy all year round.

The origins of nougat from Cremona are still shrouded in mystery. There are two main theories which could explain the unbreakable bond between the city and its signature confection.

Let’s start from the first theory. Nougat is a product that originated in the city of Cremona, where it was invented and served for the first time.

25 October 1441: Francesco Sforza and Bianca Maria Visconti got married in the Abbey of Saint Sigismund. Festivities lasted for days and there were banquets, tournaments, jousting, floats, musicians and flag-throwers.

The most important moment was when the first nougat in the world came on to the scene. It was a perfectly balanced mixture of honey, egg whites, almonds and sugar. Hear, all ye people! It was served in an upright position, since it was shaped after the bell tower of the Cremona Cathedral, called Torrazzo.

The Italian name of nougat Torrone is a clear reference to the Torrazzo bell tower (did you know that it is the tallest, Medieval masonry bell tower in Europe?) and it shows the unbreakable bond tying this confection to its city. 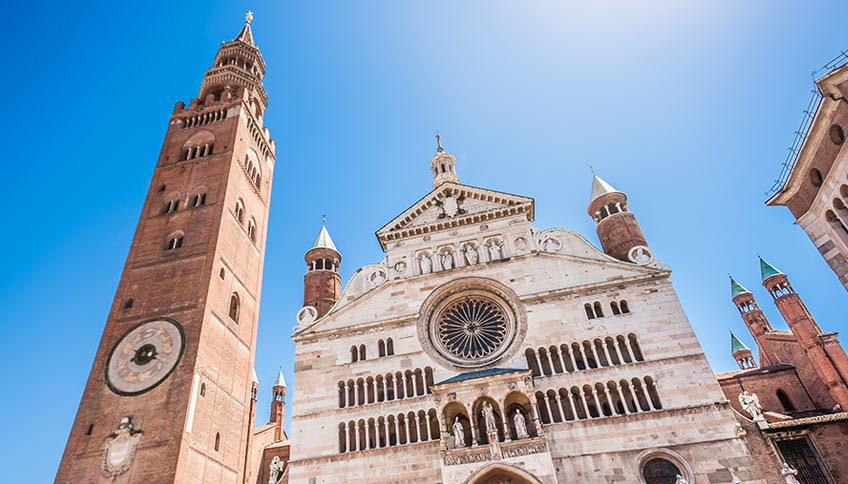 The advocates of the first theory will tell you that nougat was born in this city and that it was invented almost 600 years ago to celebrate the splendour of the wedding. Is that true? Did that truly happen?

The second theory states that nougat from Cremona has Arabian roots, as demonstrated by the fact that similar desserts are also widespread in Spain and in the South of France.

Torrone comes from the Latin word torrere which means to roast. As a matter of fact, there are similar desserts all around the Mediterranean area, containing roasted almonds and honey, such as the Spanish turrón, which is a very sweet, brick-shaped nougat with minced almonds, honey and egg whites.

Moreover, Cremona already had a very important river port way back in the Roman age. Soldiers and goods from all over the Mediterranean would regularly travel on the Po River.

That’s how almonds got to the city.  A confection which reached the city of Cremona was the Sicilian Cubbaita made of almonds (of course), sesame (another product with an Arabian influence) and honey. Could it be an ancestor of nougat?

The nougat from Cremona was born out of a mix of all these traditions. Let’s be honest: almonds and honey aren’t really typical products of the cuisine of Lombardy, after all.

People from Cremona showed great ingenuity in using these exceptional ingredients and the desserts commonly found in the Mediterranean area to make a new dessert out of them, as never seen before.

Which are the features of a perfect nougat? First of all, the quality of ingredients, then, a perfect balance between all these ingredients.

A good nougat contains a generous amount of dried fruit, amounting, in the best-case scenario, to up to half the final weight. Be wary of nougats containing little fruit; they were made by people who wanted to spend as little money as possible.

The honey to sugar ratio affects the scent and aromatic depth. Once again, be wary of those producers who put more sugar than honey; they obviously do not prioritise quality.

And then, the secret ingredient of the nougat from Cremona is patience. That’s because the real nougat is cooked in a steam boiler at a maximum temperature of 70 °C.

Excellent manufacturer, such as Fratelli Rivoltini, cook the nougat again at a low temperature for 11 hours more, before adding roasted almonds.

Then, the nougat is stretched on beech wood moulds and pressed. Finally, in order to obtain a fuller flavour, it is left to age for 3 months in cellars with a low temperature and a controlled humidity.

The Festival of Nougat from Cremona

To all lovers of the nougat from Cremona out there; we have the perfect event for you. The Festival of Nougat is held every year at the end of November in the whole city centre.

Get ready for a full immersion with shows, tastings, cultural events and the magical, historical reenactment of the wedding between Francesco Sforza and Bianca Maria Visconti.

Flag-throwers, jesters, archers, dames and knights: this Festival is the perfect opportunity to discover the city and its historical, artistic and culinary heritage.

Nougat from Cremona is a special product, a true delicacy that we always love. Even more so at Christmas.