Taralli crackers from Bari are perhaps the most famous traditional food from Apulia. They are crunchy and fragrant; they taste amazing on their own as snacks, or paired with cheeses, vegetables packed in oil, cold cuts or different dips.

Yes, they are small, but their story is quite big. They are actual giants of our country’s culinary heritage.

Taralli, between truth and legend

We are not sure where the name taralli comes from; did it come from the Latin verb torrere (to roast), from the French verb toral (to dry out) or from the Greek word daratos (a kind of bread)? What we do know for sure is that the first Taralli recipe dates back to at least the 1400s.

Legend has it that a mother from Apulia, who had to deal with many hungry children, came up with the Taralli recipe. Looking at the empty pantry, the poor woman had to sharpen her wits and mixed flour, water, oil and salt. Then, to entertain her children, she allegedly cut the dough in many strips and had the children shape them into small rings.

Even if that was not the case, there is certainly some truth in this story. Apulian Taralli crackers are made from simple ingredients: water, flour, oil and salt were staples that even poor peasants could afford and, as per usual, people had to make a virtue out of necessity.

Another big difference lies in the cooking method. Taralli from Naples are just baked, while Taralli from Bari are cooked twice, first in the pan and then baked in the oven. Grandmas would even boil them in the afternoon and would leave them to rest overnight covered by a kitchen cloth.

Then, very early in the morning – we all know that grandmas are early birds – they would bake them, to make them incredibly crunchy and crumbly. Unfortunately, it is quite hard to keep this tradition alive, since it requires time and patience which are virtues that industrial manufacturing does not possess. 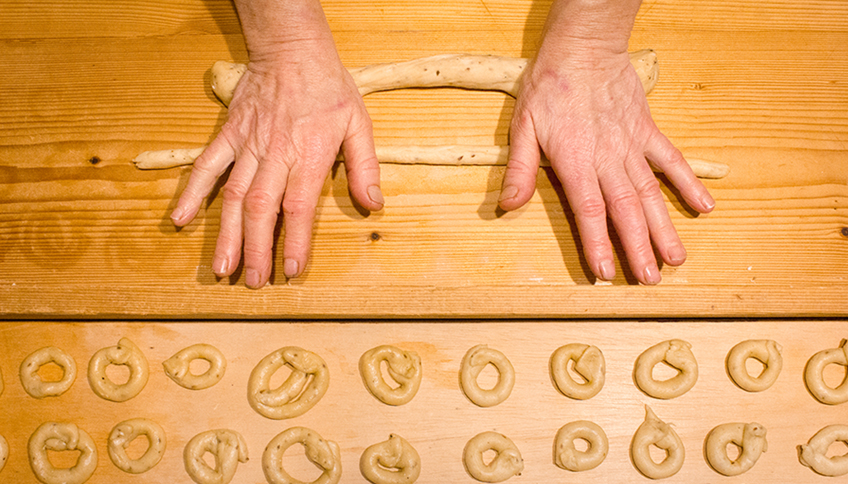 If you find a bakery that makes Taralli the traditional way, do not let it go. We found one and we are glad to introduce it to you. It is Danieli, il forno delle Puglie (Apulia’s bakery), whose headquarters are located in a village in the province of Bari.

The place of production plays an essential role, too. In Bitonto there is also an exceptional extra virgin olive oil which lends Taralli crackers and any other product an incredible flavour. No preservatives, colouring agents or artificial aromas; only natural, genuine and selected ingredients that have been processed by hand according to jealously guarded ancient recipes.

To sum it up, they are made as tradition dictates. And you will taste the difference for sure. These Taralli crackers, both in the classic and in the more creative versions, are truly out of this world.

When we talk about Taralli from Bari, we have to mention fennel seeds. Even though traditional Taralli crackers are made from only four ingredients, the version with fennel seeds is so widespread that it is considered the most typical one.

Let’s keep in mind that the poor mother from Apulia came up with this delicacy, only using the ingredients that she had in her home. That being said, fennel seeds, olives, onions and chili pepper are ingredients that one could easily find on the market for a reasonable price.

Flavouring Taralli was not that expensive and meant that people could eat a slightly different product every day, which was affordable, fragrant and delicious.

Fennel seeds are common ingredients, just like black pepper, chili pepper, onions and olives. And as long as high-quality and genuine ingredients are used, there is nothing wrong with making Taralli even more delicious.

Traditionally, Taralli are paired with a nice cheese and cold cut platter. They are addictive and their crunchiness creates a nice contrast with the cold cuts and their enveloping flavour, as well as with the soft cheeses.

Since we are on the subject of softness, have you ever tried them with whipped cod? For a perfect aperitif, serve classic and flavoured Taralli crackers with classic whipped cod or even whipped cod with olives, chili pepper, or to impress your guests, with truffle.

Another creative way to enjoy the unique flavour of Taralli crackers is to crumble them and add them to pasta or risotto for a crunchy twist. You should definitely try Paccheri pasta with sundried tomatoes and Taralli crumbles or Spaghetti noodles with garlic, olive oil and chili pepper with crumbled Taralli from Bari.

If you want to make canapés, you can replace the outdated vol-au-vent with Taralli crackers. Spread a thick sauce or add a cheese cube, to prevent the filling from falling down the hole and that’s it.

Whoever thinks that Taralli from Bari are ‘just’ a snack is obviously not aware of the story behind them. Their size might be small, but their flavour is big and you won’t be able to stop snacking on this traditional product from Apulia.