The most valuable cold cut…

Today we are going to talk about the king of cold cuts, PDO Culatello di Zibello. It has an old story, unique scent and flavour, a strictly regulated production, as well as a big price tag. You’re probably thinking that costing almost 100 euros per kilo, this product has more than just a big price tag, but you will soon realise why it is so expensive.

Culatello di Zibello undoubtedly belongs to the latter group. It is a product worthy of our respect, which cannot be eaten carelessly. And it is not a cold cut that you can just slam on some bread to appease your hunger. Quite the contrary.

Sliced Culatello is, as a matter of fact, just the tip of the iceberg, the concrete end result of a century-old story, an artisan tradition and culture, a skill encompassing craftmanship, science and passion.

A slice of history

While the place of origin is undoubtedly Zibello, a small hamlet in the municipality of Polesine Zibello, it is much more complicated to exactly date back its origins.

Two important dates stand out in recent history: on the 8th January 2009, the Supervisory Consortium of Culatello di Zibello was founded and on the 2nd July 1996, it obtained the PDO label; we will see later on what the label entails in terms of production and processing.

Going back in time, we also find the letter that the poet Gabriele D’Annunzio sent to his friend Renato Brozzi on 30th June 1891, where the poet describes himself as an “enthusiastic lover of Culatello from Parma.”

Then, in 1818, the dialect poet Giuseppe Maria Callegari mentioned two specialties from Parma among all the food that he reckons would be eaten in heaven: the rice bomb recipe and Culatello. Can you blame him?

However, Culatello was officially mentioned for the first time in 1735 as part of a price list of salted pork meat products of the Parma municipality. Back in the day, Culatello was actually cheaper than salami!

Going even further back in time to 1332, we stumble upon the wedding banquet of Andrea dei Conti Rossi and Giovanna dei Conti Sanvitale. Among the most precious wedding gifts, there was some Culatello.

Culatello was also gifted to Galeazzo Maria Sforza, the Duke of Milan, by the ancient feudal family Pallavicino. And it was actually the Pallavicino family, who ruled the territories nearby Zibello from 1249 until the Napoleonic era, that allegedly promoted pig farming and the production of hams and Culatello.

That’s why the silver and red colours of their coat of arms are also used in the trademark of the Culatello di Zibello Supervisory Consortium.

How is Culatello made?

PDO Culatello di Zibello is only made from October to February, as the cold fog allows an ideal ripening, and it is only handmade without using any refrigeration systems. The production area is limited to Polesine Parmense, Busseto, Zibello, Soragna, Roccabianca, San Secondo, Sissa and Colorno.

Pigs, which are born, reared and slaughtered in Emilia Romagna or Lombardy, are of White, Landrace or Duroc breeds (the same breeds of Parma dry-cured ham); they must be at least 9 months old and weigh at least 150 kilos.

Culatello is the heart of the ham. The bone and rind are removed and only the upper part of the hind leg is used, while Fiocchetto cold cut is made from the lower part. What is left is the core of the leg, the most refined part since it is only made of muscle mass.

The meat that was obtained is salted and left to rest in the cold and in the dark. After some days, the meat is massaged with salt, pepper, cinnamon, garlic and dry white wine and it is then left to rest once again.

The meat is now filled in a pig bladder which has been washed and dried. Afterwards, everything is tied with twine in a spiral, in order to obtain the signature pear shape, and it is tightened very well to prevent air bubbles from forming.

But wait: from one pig one can obtain two Culatello, but only one bladder. That means that one Culatello is filled in the stomach. It is an equally prime product, but today we are only going to talk about the original one, which is Culatello filled in the bladder.

So, we left off at the aging, when the secret ingredient kicks in: the unique, local microclimate. This microclimate is characterised by cold, damp and foggy winters, very hot summers and a good combination of wet and dry days. Without all this, Culatello would not have that exceptional flavour.

It ages for at least 18 months in underground cellars. While it ages, Culatello dries out, loses weight and forms a layer of good mould which protects it from oxidation.

The manufacturers don’t get to rest, while Culatello is aging, though – quite the contrary. They have to check the light and ventilation, making sure to move the Culatello from one side to another, if needed. 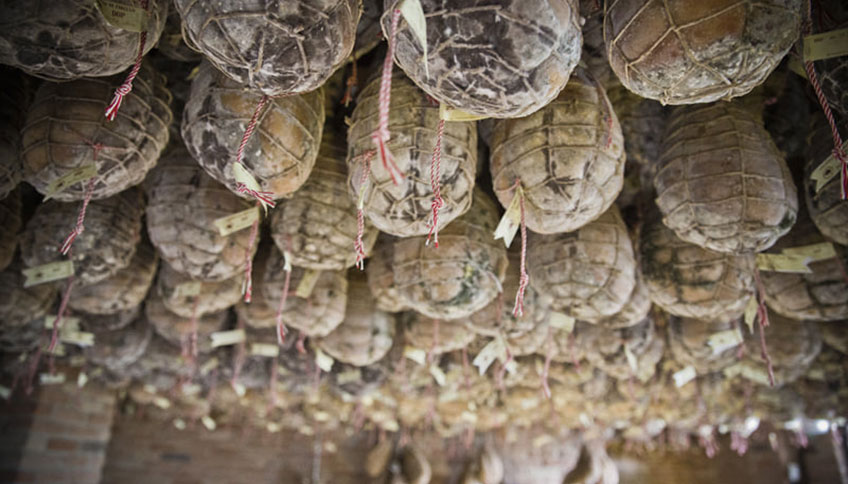 How is it served?

To be honest, Culatello di Zibello should be eaten by itself. If you want to eat some bread with it, the most suitable kind of bread is Micca bread from Parma with a thin layer of butter, or fried dough, even though it could slightly change the flavour of Culatello.

You could pair it with Parmigiano Reggiano or Squacquerone cheese or even with some pickled vegetable mix, but the best way to enjoy it is by itself. Such an exceptional product doesn’t need anything else.

If that wasn’t clear, you need a whole ham to make a 3-kg Culatello di Zibello. Yearly production does not exceed 50,000 pieces and since production is carried out fully by hand, it requires time, skills and care and that is, at the end of the day, very expensive.

Culatello di Zibello is only made in the winter in a very restricted area. The PDO label forbids the use of refrigeration systems and to make each Culatello, one needs to wait almost 2 years. Do you get now why it is so expensive?