Do you remember when you used to study the five senses at school? And when it came to taste, the map of the tongue with the different areas of perception? The teacher would say that sweet is on the tip, salty is a little further back, sour is even further back and bitter is at the bottom.

Did you forget about it right? It’s ok, it was (almost) all wrong anyway. That’s right, recent studies have shown that the whole tongue tastes all the flavours - and anyway a pinch of salt on the tip of the tongue was enough to prove it.

But above all, the fundamental tastes are not four but in fact five (actually, there are even those who say six considering the so-called “oleogustus”, but this is another story). So, what is this fifth taste that managed to escape science (and the teacher)? Does Umami ring a bell?

Umami, history of a patented taste

The fifth taste is called umami – which in Japanese tasty, savory – and was discovered by Kikunae Ikeda, Professor of Chemistry at the Tokyo Imperial University School of Science.

In 1899, the young Kikunae wins a scholarship at the University of Leipzig. He studied with Professor Wilhelm Ostwald, Nobel Prize winner, and was fascinated by the Germans’ lifestyle, but above all by their physical size and, like a good scientist, he researched the primary reason of food.

For the first time he tasted tomatoes, asparagus, seasoned meat and cheeses, practically unknown foods in the Japan of the late '800. He also understands that in addition to sweet, salty, sour and bitter there is much more, a taste still to be discovered.

In 1901 he returns to Japan and begins to exploit scientific research to improve the living conditions of the people. The discovery of the system to produce salt through the evaporation of sea water dates back to these years, among other things.

Then, in 1907, the enlightenment. His wife Tei brings home a bundle of seaweed to prepare some dashi broth, one of the central ingredients of Japanese cuisine. Kikunae tastes the seaweed and has like a flashback of all the tastes from Germany, that seasoned meat and those cheeses so different from oriental foods.

Everything is clear: so there really is another taste, different from the four known! The scientist immediately gets to work and manages to isolate glutamic acid, the central element of the taste of algae.

But it’s not enough, because Kikunae wants to market an umami seasoning to make the precious nutrients contained in it accessible to all Japanese. After trial and error, he eventually develops a way to produce monosodium glutamate, a glutamate-based dressing.

On July 25th 1908the patent was approved: umami was officially born. The official recognition of the scientific community, however, only came in 1997 at San Diego’s International Symposium on Olfaction and Taste, 61 years after the death of Ikeda’s death.

The strangest thing? It was discovered in 1908, officially recognized in 1997, used in traditional kitchens for at least two millennia. Have you ever heard of garum? It is a fermented sauce made from fish entrails used by the ancient Romans. Apicius, Columella, Petronius and Seneca talked about it, just to name a few... And it’s the perfect example of umami taste!

We talked about seaweed, seasoned meat, fermented fish and German cheese, but where else can we find the umami taste?

A classic example is the stock cube we use in the kitchen, a preparation based on monosodium glutamate, but seafood, shellfish, mushrooms (especially dried), balsamic vinegar, soy sauce and cured Parmigiano Reggiano cheese are also perfect samples to taste umami.

They’re all undoubtedly exceptional products, but our favourite is the black garlic. Careful, it’s not a different variety, but the result of the fermentation of classic white garlic. Fascinating, isn’t it? Allow me to explain. 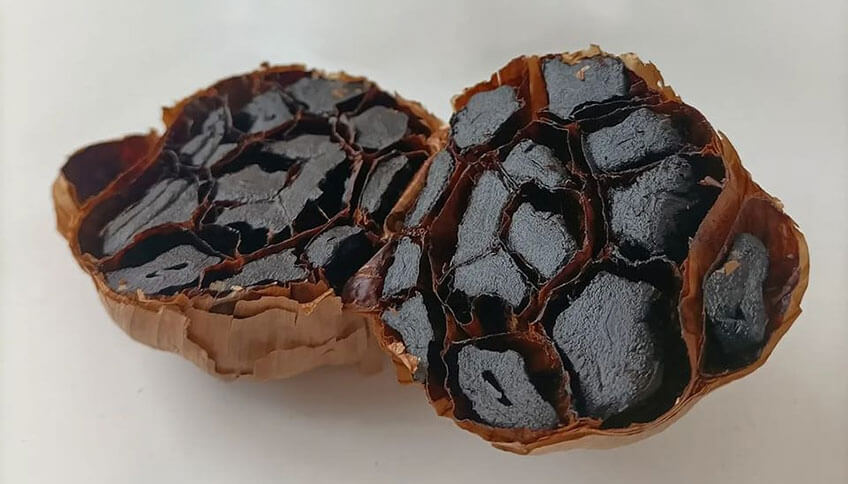 Black garlic, a boost of flavour

Black garlic is widely used in Korean, Thai and Japanese cuisines. You can add it to ramen, pad thai or red curry, but also use in local recipes for that extra taste.

Our favourite black garlic is the one from Umami, a name you can trust. This is PDO polesano white garlic,matured and fermented in a totally natural process for at least a month in temperature and humidity controlled environments.

Let’s be clear, we are talking about a product that is already exceptional to begin with. Polesano white garlic, which already used to be cultivated between the Po and Adige rivers by the Romans, has a much more delicate aroma than normal garlic and an intense but not pungent taste, not to mention the extraordinary nutritional properties.

By fermenting, the garlic loses all its allicin, becoming more digestible without leaving unpleasant odours in the mouth and acquiring a soft and velvety texture. Above all, what changes is the taste: all the umami flavour, reminiscent of balsamic vinegar and soy sauce, comes out.

Exceptional in purity, perfect as spread and as a salt seasoner, black garlic is a real gourmet product that enhances the flavour of meat, cheese, fish and vegetables.

Umami at the table

Here are some ideas to bring the real umami taste to the table, and with a product like Umami’s black garlic it’s incredibly easy to create an amazing dish.

Let’s start with whole black garlic. Crush a couple of cloves and use them for a nice plate of spaghetti with (black) garlic, oil and pepper. Alternatively, you can avoid pepper and add raw shrimp, burrata cheese or tomatoes confit.

Black garlic spread, on the other hand, is ready to be put on a nice bruschetta. On top of it you can add a slice of lard, burrata cheese and two anchovy fillets, stewed squid or simply fresh diced tomato.

And what about salt flavoured with black garlic? It’s perfect to add just a touch of umami to all your recipes, from a simple fried egg to baked fish, from a tray of veggies to a nice fiorentina steak.

Umami, how were we supposed to live without it?