THE BEST SPECIALTY FOOD OF CAMPANIA: PASTA FROM GRAGNANO

There is no other product that can embody the excellence of Campania delicacies better than pasta from Gragnano. A great deal is being said about the quality of the most famous Italian food in the world: is the wheat 100% Italian or is it mixed with foreign wheat? Does it contain pesticides? This is perhaps the pasta with the most impressing history and sensory properties and luckily, there still are many great virtuous pasta makers, like the Pastificio dei Campi company.

The pasta from Gragnano is so deeply tied to its territory that since 2013 it is protected by the “protected geographical indication” label. The small municipality of Gragnano in the region Campania - counting a little over 14 square metres and 30,000 inhabitants - has particular geographical features which make it ideal for pasta production.

In order to be designated as PGI Pasta from Gragnano, pasta must satisfy specific requirements:

Let’s explore the drying process more in detail. The pasta from Gragnano dries at a temperature between 40° and 80° for a period between 6 and 70 hours. Each pasta maker decides what best suits his/her pasta. For instance, Pastificio dei Campi likes its pasta to undergo a slow process, which is pretty evident in the end result. To put this in context, common pasta dries at 75° for 4 to 7 hours; you can see the difference.

For what concerns sensory properties, this slow low temperature drying process allows preserving the pasta protein structure, thus preventing breakage during cooking, and creating an elastic, hard and firm noodle. That’s why the Gragnano pasta can also be whisked in a pan.

Why bronze extrusion is so important

Extruding pasta through bronze dies also helps improving the taste quality of the pasta. Other industrially-made pasta is usually extruded through Teflon dies. Bronze dies leave a rougher and more porous surface which appears whiter. That’s where the pasta from Gragnano gets its nickname “white gold”.

Furthermore, a more porous pasta will absorb the cooking water more easily; that’s why it’s important to drain the pasta from Gragnano after the exact cooking time as stated on the package, to obtain an excellent result.

The story of the pasta from Gragnano

Protecting this territory and this city locked between the mountains and the sea and blessed with a microclimate where wind, sun and humidity are perfectly balanced, has been pivotal in preserving the pasta making tradition, as well as the artisan techniques and original pasta-making process dating back to over 500 years ago.

As a matter of fact, the story of the pasta from Gragnano is very old. In Roman times this territory was already renowned, because wheat coming from Roman colonies was milled there. The resulting flour was then sent to the nearby cities of Pompeii and Herculaneum. The golden era of dry pasta began in the 16th century. 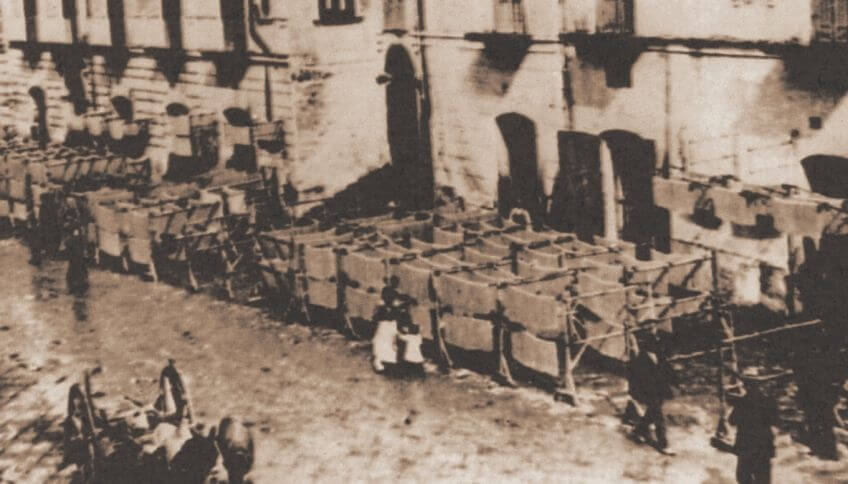 In the 16th century the guild of vermicellari (pasta-makers) was founded in Naples, since the production of dry pasta with locally produced and milled flour had become a deeply-rooted tradition.

Pasta is what saved the Kingdom of Naples from a devastating famine. It was an essential foodstuff, since not only it is rich in proteins and carbohydrates, but it can also be easily sourced thanks to the production with bronze dies. The production of white gold was spreading on a very suitable territory, which had the ideal microclimate to dry pasta.

The 19th century and the luck of Gragnano

The lucky event that crowned Gragnano ‘the city of pasta’ occurred on the 12th July 1845. That day the Bourbon King Ferdinand II declared that all long-shaped pasta served in the court had to be supplied by Gragnano pasta-makers, thus making Gragnano the ‘city of maccheroni-pasta’.

In the 19th century there were around 70 family-run pasta-manufacturers in the city, which increased to 100 by the half of the century. The city of Gragnano evolved and via Roma, the main street, was scattered with bamboo canes from which handmade pasta, in particular maccheroni and ziti, was hanging to dry in the sun. Of course pasta production has changed a lot since then. The 20th century brought industrialisation even in this field, although there are many pasta-manufacturers which are still loyal to traditions.

From side dish to main dish

Pasta hasn’t always been a main dish. It was our dear Pellegrino Artusi who sparked this change, by publishing several recipes where pasta was not a side dish to meat or eggs anymore, as in Roman times.

From this moment on, after Artusi initiated a country-wide revolution of eating habits, Gragnano started producing over 100,000 kilograms of pasta a day. The rail network was implemented to transport flour and pasta. Since then things have evolved a lot; in 2003 the Consortium “Gragnano City of Pasta” was founded.

Pasta is a very special dish for us. But we are not alone in saying this. Its quality is also backed up by the data on exportation: one of the most beloved product from Campania - in Italy and abroad- amounts to more than 10% of total export of Italian industrial dry pasta.

Maybe it’s because you only have to add some San Marzano tomato sauce, some mozzarella di bufala from Campania or a little anchovy sauce and a thread of olive oil to prepare a very special dish. Regretfully, pasta has now become a quick dish which is too often sloppy and neglected, because of the whirlwind of everyday life. Although it does not require a long preparation, this dish can offer a great deal of unique flavours and it is such a pity that its potential is now left untapped. As always, the difference lies in high-quality ingredients!