The most typical pasta shapes for the greatest traditional recipes

If we combine Gragnano pasta and the great traditional recipes, we get the dream of every gourmet,Italian and beyond.

Because to approach the sacred dishes of our cuisine you need knowledge, but above all some top notch quality products. If we decide to replicate one of the greatest dishes with Italian pasta, we certainly cannot do it with any pasta.

The choice can only go to Gragnano pasta, one of the delicacies of our gastronomy, known and loved worldwide. It’s in this small village in the province of Naples – less than 30.000 people – that the best pasta in the world is produced.

Gragnano, from the mills to the PGI

As we’ve already mentioned, when it comes to pasta, everything started in Campania. There’s a reason why Gragnano is known as the City of Pasta, trust me!

In Gragnano, wheat has been milled since the Middle Ages. If you haven’t already, plan a nice trip to the Valley of the Mills: you can admire the ancient water mills on the Vernotico stream, the beginning of a unique history, all to enjoy.

The first industrial pasta factories opened in the nineteenth century. In 1845 the king of Naples Ferdinando II of Bourbon decided that for him Gragnano pasta was the one and only: since then, at court, only that pasta can be cooked. In 1855 a railway line was built between Naples and Gragnano to manage the pasta trade.

In the twentieth century, the crisis came. Many industrial pasta factories also opened in the North and are more competitive in terms of speed and efficiency, but certainly not quality.

Gragnano resists and focuses on the quality of pasta. No compromises: the lathes remain manual, the drawing slow, strictly bronze.

In November 23, 1980 Gragnano is destroyed by the Irpinia earthquake. Only 8 pasta factories survive but manage, almost miraculously, to revive the fortunes of a city considered lost.

In 2003 the “Gragnano Città della Pasta" Consortium was founded and in 2013 Gragnano pasta gets the Protected Geographical Indication mark.

A long and winding road, from stone mills to worldwide success, passing through endless pasta dishes. 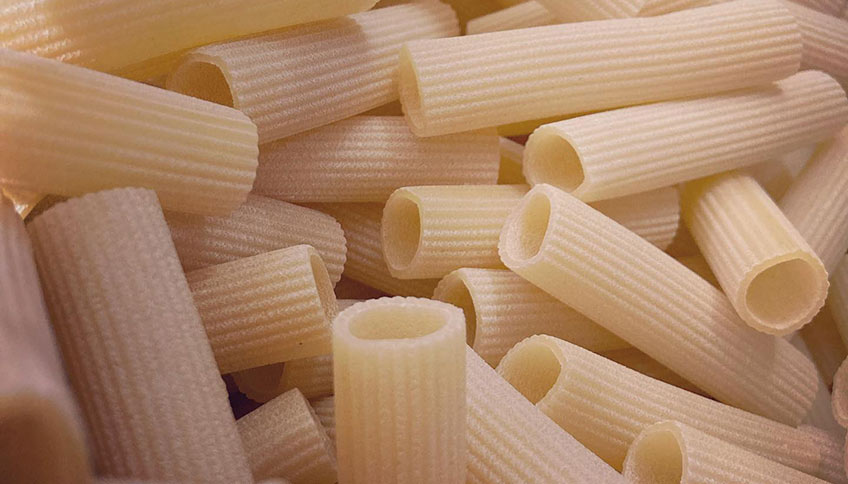 Gragnano pasta, a name you can trust

We spoke about Gragnano and its history, but certainly this is not enough to make a truly exceptional product. So what is so unique about Gragnano pasta? Why can this pasta, and this pasta only, enhance the great traditional recipes?

Let’s be clear: the time spent in the kitchen was not a problem in the past. No one was looking for "5 minutes recipes" or "quick meals ". To make a recipe, it took exactly as long as it took, no more, no less. And it was fine, time pressure was not part of the daily routine.

If you plan to make a long, elaborate recipe, a real piece of history, with a pasta that is not up to par, it’s just not close to good enough.

Bucatini pasta are basically large spaghetti with a hole in the middle, invented, apparently, in Sicily during the Middle Ages. The pasta makers of the time wrapped the dough around a stick to speed up the drying process and favor an optimal cooking. The stick was then removed leaving the dough, in fact, with a hole (from the Italian word “buco”, which means hole, comes the name Bucatini).

However, Bucatini pasta’s real success was in Lazio, when they got paired with Amatrice pork jowl and Amatrice Pecorino cheese and the “Gricia” pastawas born (or, in the following version with tomato, “Amatriciana” pasta).

Smooth ziti pasta are one of the most typical pasta shapes from Campania. Their name recalls the Italian word “zite”, the unmarried girls who definitively abandoned this condition on their wedding day. Ziti pasta were an essential dish of wedding lunches.

Another version says that the term ziti actually refers to the Italian word “zitelle” (old maids). In fact, having no husband to think about, they had time to cook the ziti’s quintessential sauce, Neapolitan ragout.

To make the Neapolitan sauce it takes a whole day, hours and hours of cooking and at least 5 different cuts of meat, not to mention that chops must be made first, rolls filled with garlic, parsley, pecorino cheese, parmesan and – traditionally – raisins and pine nuts.

It’s a lot of work and let’s be honest, to think of pairing it with any pasta that is not Gragnano’s is a real insult.

Tub gurnard fish is as good as difficult to clean. bones, head and carcass should not be thrown away, but used to prepare a nice fish broth, which we will use to flavour the pasta.

The flesh of the fish is cut into pieces and put in a pan with a little oil, a clove of garlic and, if you like, a little chili. Simmer it with white wine, add the fish broth and the tomatoes cut in half, let it boil for another 5 minutes and the sauce is ready.

Fun fact: do you know why paccheri pasta are called like that? The name comes from the Greek “pan”, everything and “keir”, hand, which would translate as something like “open slap.” Why? Because that’s the sound some well seasoned paccheri make when they fall on the plate.

Gragnano pasta is the only option for top notch dishes. But don’t worry, if you’re looking for less demanding dishes, just know that Gragnano’s pasta is so good that you will need a simple and fresh tomato sauceor a timeless garlic, oil and chili for an exceptional dish!