Easter is around the corner and the first preparations for the Easter breakfast, always considered as a moment of great conviviality and general enjoyment, are already underway.

Each region has its own traditions, but there is an undisputed precept that runs from North to South: Easter breakfast must be LARGE.

It’s not a matter of greediness – not only that, at least. Because Easter breakfast symbolizes the return to life, and the prize for fasting during Lent. It has tobe rich and abundant.

But what are the most traditional dishes to celebrate rebirth? Which preparations cannot be missing on the festive tables? Between Easter “pasqualina” cake and “pastiera” tart, corallina salami and Easter pizza “sbattuta”, let’s get ready for the great tour of delicacies.

Festive delights between Liguria and Tuscany

In Liguria, especially in the area of Genoa, we greet Easter day with a “pasqualina” cake (“pasqualina” coming from “Pasqua”, Easter in Italian). Could we possibly start our journey anywhere else?

Easter “pasqualina” cake is a true gastronomic celebration of the Easter and spring period. In the past centuries, eggs and cheese, the main ingredients of the filling, were certainly not eaten every day, but were reserved for very special occasions.

And the herbs – yeah I know you put spinach in it, but the real recipe is with field herbs – are born exactly in this period.

One more thing: the shell was traditionally composed of 33 thin sheets of puff pastry, as many as the years of Christ. Easter at its finest…

In the Arezzo area, we celebrate with “unta” and “gialla” panina bread. Because Easter breakfast is also a nice seamless mix of sweet and savory.

“Panina unta” bread it’s a sort of flatbread with lots of lard in its dough and pieces of Tuscan rigatino. “Panina gialla” bread is filled with raisins and also contains some precious saffron. Two historical delights, bringing all the genuine taste of tradition to the table.

Easter breakfast on the tables of Rome

The quintessential Easter breakfast is the Roman one. Corallina salami certainly can not miss, but eggs, omelettes, artichokes and flatbread abound as well.

It’s not Easter without corallina

As we’ve already seen talking about cold cuts from Lazio, corallina salami’s history is very ancient. Today we can fortunately find it all year round, but the corallina and cheese pizza duo is still a pillar of Easter breakfast.

Corallina salami owes its name to corallo, the first section of the pig’s colon used as casing for the meat mixture. It Made from fine meat cuts – shoulder, ham and loin – that are finely ground and mixed with dices of fat, corallina salami is one of the most exceptional regional agrifood products (PAT Italian quality label) in Lazio.

It is pinkish-red in colour and has an incredible scent, thanks to the mixture of spices and its aging – at least two months – in temperature and humidity controlled environments.

The best way to eat it? With an Easter pizza, a cheese-based leavened savory pie, a real explosion of flavour.

Among the capital’s musts we also have omelette with artichokes or lamb offal, for those who are ready to face a more challenging dish even in the early morning.

A sweet note? Pizza “sbattuta”, a cloud of sweetness. And it’s also yeast-free, it only stays up thanks to the perfect – strictly manual – whisking of eggs and sugar. 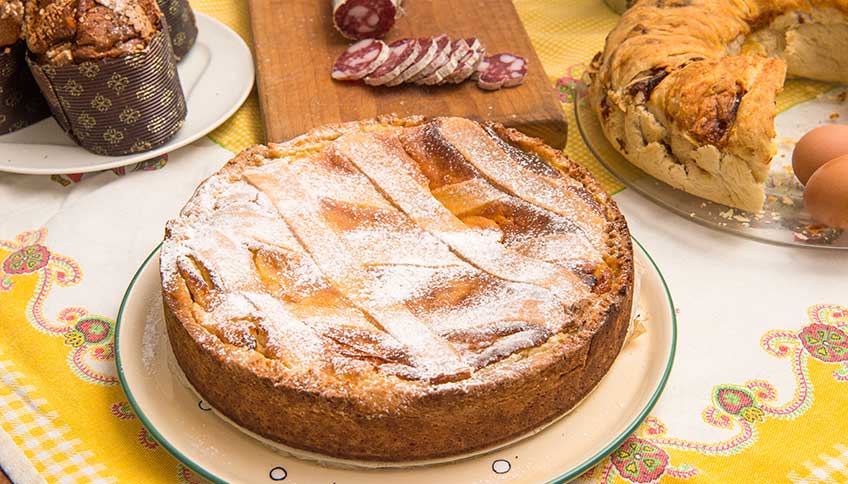 What do you eat in Naples?

Let’s salute offal and Roman corallina and head to the South. Even Naples doesn’t play and between “casatiello” bread, “tortano” cake and “pastiera” tart, the fasting of Lent is just a bad memory.

“Casatiello” is a sort of bread donut enriched with lard, cheeses and cold cuts and decorated with eggs “caged” by thin strips of dough.

As we’ve already seen talking about chocolate eggs, the symbolism of the egg is inextricably intertwined with the meaning of Easter: rebirth, life that is renewed, nature rising…

A close relative of “casatiello” bread but less popular is the “tortano” cake, a rustic donut enriched with meats, cheeses and greaves. By the way, do you know why casatiello and tortano have this specific shape? Because they arereminiscent of the crown of thorns.

Let’s end in sweetness with the “pastiera” tart, a masterpiece of Neapolitan pastry. A shortcrust pastry shell with a soft filling of cooked wheat, ricotta cheese and candied fruit, with the unmistakable scent of orange blossom water.

Then we have Umbrian cheese pizza with capocollo cold cut, Calabrian “cuzzupa” cake or Sardinian “pardulas” tartlets, not to mention Easter “pinza” bread from Trieste or “cacioni” dumplings from Marche.

Because Easter, from North to South, means a rich breakfast, possibly followed by a rich lunch. Whether your traditions include corallina salami, “tortano” or “pasqualina” cake it doesn't matter, what matters is to celebrate together in the name of good food.


Posted in: The foodie's journal