Let me guess: you’ve had a plate of pasta once in your life. You didn’t? Weird, then you must not part of the 83% of Italians who consume pasta at least once a day.

A nice percentage, right? We Italians are the first pasta consumers in the world with an average of 23,5 kg per year (source International Pasta Organisation), against Tunisia’s 17 kg and Venezuela’s 15 kg, with which we share the spaghetti-eater podium.

Last year almost 17 million tons of pasta were produced in the world, almost twice as many as 10 years ago. Therefore, consumption and production are growing. However, does quality increase in proportion to quantity? Or does it risk getting lost in the large distribution?

Pasta is increasingly produced and appreciated, but what kind of pasta are we talking about? Italy maintains world leadership with 3.5 million tons in production, followed by the US (2 million), Brasil (1,1 million) and Russia (1 million). It goes without saying: tothink that all countries apply the same quality standards that we expect is just a fun dream.

What does PGI mean?

But how can we protect ourselves? How can we be sure that the pasta in our dish is healthy and genuine? The system is always the same: read the label!

The first filter is the “made in Italy”. For us food lovers, this is just an initial selection. If you really want to enjoy pasta without any worries, look for the PGI certification mark.

As the Ministry of Agricultural, Food and Forestry Policies explains, A Protected Designation of Origin is a name which “identifies a product originating in a specific place, region or, in exceptional cases, a country, whose given quality, reputation or other characteristic is essentially attributable to its geographical origin and at least one of the production steps of which take place in the defined geographical area”.

And when we talk about PGI pasta, we’re talking about Gragnano pasta.

Gragnano, the city of pasta

Gragnano is known as the city of pasta (and rightfully so). This small village in the province of Naples produces the very best pasta in the world, and not just recently.

In the Valley of the Mills on the Vernotico stream wheat has been milled since the Middle Ages. Then, in the nineteenth century, the breakthrough. King Ferdinand II of Bourbon himself, at the court of Naples, only wanted Gragnano pasta and built a special railway line for its supply.

In the twentieth century, the crisis came: the first industrial pasta factories open in Northern Italy and produce 10 times as much as the Gragnano pasta factories. The earthquake of 1980 is the final blow. Only 8 pasta factories survived, but the city managed, almost miraculously, to get back up and flourish again focusing on quality even at the expense of quantity.

This choice amply paid off in 2003 with the birth of the Gragnano City of Pasta Consortium and the PGI certification mark in 2013.

But why is Gragnano pasta different from all the others? The story is, certainly, iconic, but it takes much more to create a myth.

Let’s start with raw materials, but let’s make something very clear. ThePGI certification mark does not necessarily require that all the ingredients used come from the geographical territory. For example, there are brands that produce PGI Gragnano pasta with non-Italian wheat and technically speaking there’s nothing wrong with this.

It must also be noted that only few countries apply policies of control over agri-food products like we do. And let’s also say that, if we could choose, we’d eat PGI Gragnano pasta made with Italian wheat. It would seem strange to do otherwise.

Our friends from “Pastificio dei Campi”, for instance, only use durum wheat of the oldest varieties, grown in the Table of the Apulias. Chemical fertilisers and glyphosates are prohibited, as well as land exploitation. There’s a crop rotation every 3 years: the yield is lower, but the quality is unmatched. 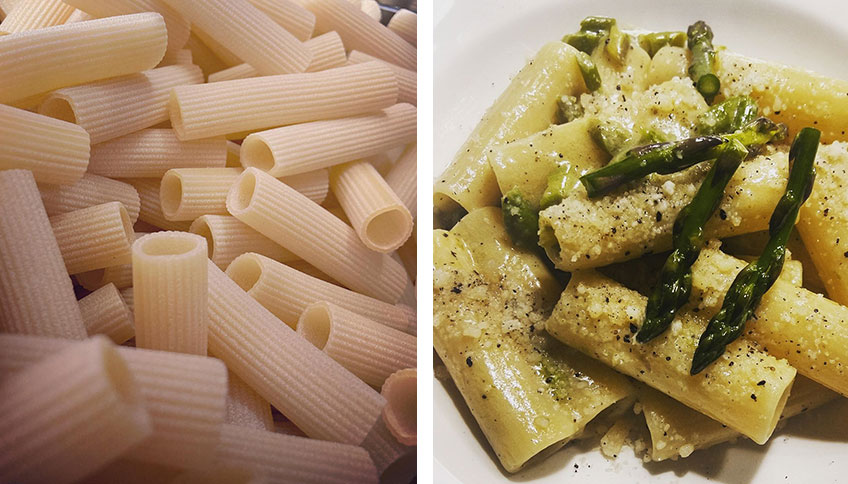 How is Gragnano pasta made? What is so unique about these production techniques? The bronze die is surely one of the main protagonists of this story: that’s what makes this pasta so porous and rough. The teflon mould, on the other hand, is the one used in industrial pasta factories, which makes the pasta smooth and almost “condiment-proof”.

Another protagonist of this story is time. Drying is slow, it can take up to 60 hours for the perfect pasta. All you can do is wait, because good things take time.

A system of total traceability

Our colleagues at “Pastificio dei Campi” define themselves as “modern interpreters of a centuries-old tradition” and we couldn’t agree more. One thing we particularly appreciate - in addition to spaghetti, bucatini, paccheri, ziti, fusilli and rigatoni - is transparency.

There’s totaltraceability, there’s a data collection system that allows you to get all the information related to each packet, from the field to its packaging.

This way, the consumer knows exactly what’s on his plate and can give a face to all those who have worked so that this Italian gastronomic delicacy would get on his table.

“Pastificio dei Campi”’s Gragnano pasta is objectively superior to all others. Only these packets will offer you Italian wheat cultivated to perfection, artisanal production techniques and traditional formats. And if you’re still unsure, just boil some water and taste it!