All hail the ketchup

What do you think of, when I say ketchup? Let me guess, this image pops into your head: a well-known fast-food chain, fries and hamburgers, a ketchup plastic bottle (the horror!).

The majority of Italian people deem ketchup as a low-quality product. Many of them probably have it in their fridge, but they are not proud of it. Ketchup is often regarded as an “American product” or even worse.

Truth be told, there is nothing wrong with ketchup – quite the contrary. The balance of sweet and sour flavours is not new in the Italian traditional cuisine, but there is something about this sauce high in sugar and vinegar that makes the finest palates turn up their noses.

Let’s go back one step. How did ketchup first originate? How did it spread across our country? And why is it so highly disregarded?

Ketchup: a sauce from far away

You might be surprised to learn that ketchup did not actually originate in the USA. Its origins date back to more than 500 years ago, and lie in the coastal region of Southern China called Fujian, which was back then the most important maritime hub of South-East Asia.

Maritime trade exchanges connected this region to the Philippines, Indonesia, Malesia, Cambodia and Vietnam. Chinese sailors also headed inland, by going up the Mekong river. On the river banks, they stumbled across fishermen villages, where a thick sauce made of fermented fish – the ancestor of modern-day ketchup – used to be made.

Ketchup means fish juice in the sailors’ Hokkien dialect. Sailors fell in love with this sauce with an intense flavour and brought it with them across South-East Asia.

In the 17th century, China trade routes reached Europe. Exchanges, crossroads and influences allowed this fermented fish sauce to reach our continent, too. This new product gained immediate appreciation and court chefs liked to refine it, by adding mushrooms, walnuts, lemons or oysters.

Ketchup and the USA: a three-century old love story

At the end of the 18th century, ketchup landed in the States, where it underwent a transformation and became the sauce we all know today, thanks to the ingenuity of James Mease, a doctor, scientist, numismatist and horticulturist from Philadelphia. He came up with the genius idea of replacing fermented fish with tomato. In 1812 he published the first ketchup recipe, which contained neither sugar nor vinegar, but rather brandy and many spices. It met with great success.

Did he really come up with it by himself? Not really, considering that only a few years prior, Maria Eliza Rundell had published in England and in the USA “A New System of Domestic Cookery”, a collection of everything that a good housewife was supposed to know: treatments and home remedies, tips on how to treat servants and, most of all, recipes. Among all recipes the first tomato sauce recipe ever printed stood out.

Farmer Jonas Yerkes was the first to bottle ketchup in 1837. Making ketchup wasn’t hard, but it required many ingredients, such as different spices and aromas, and a very long cooking time. Selling it in bottles was a great idea.

And then Henry J. Heinz, a true marketing genius, came along. In 1876 he improved the original recipe, by adding onion, sugar and vinegar and he promoted his ready-to-eat ketchup as a “Blessed relief for Mother and the other women in the household!"

The recipe was modified again in 1906. The Food and Drug Administration prohibited the use of sodium benzoate for preservation. Heinz was ready to tackle the challenge, though: he simply added even more sugar and vinegar, so that the sauce wouldn’t need any more preservatives.

That was the story of industrial ketchup that we can still find on the supermarket shelves. It is very sweet and very dense; it doesn’t contain any sodium benzoate, but it’s still a long way from being healthy and genuine food.

It is all a matter of ingredients

We must admit that the ever-increasing industrial manufacture of ketchup is not due to the low quality of ketchup itself, but to the policy and decision-making of manufacturers. Believe me when I say that ketchup can be a truly exceptional product, if it’s properly made from prime-quality ingredients.

First and foremost, tomatoes: they must be ripe, Italian and processed when they are still freshly harvested. Sugar is added in the right quantity, in order to balance and round out the flavours, and not to cover them. The quality of vinegar and of aromatic herbs is important, too.

To sum it all up, making exceptional ketchup is possible and it is a must. It is important to save its reputation, because ketchup shouldn’t only be a condiment to junk food!

Ketchup was originally made from fermented fish; then, for a long time, chefs added all sorts of ingredients to it. Only at the beginning of the 20th century did ketchup acquire the taste we all know today.

We can also customise, change and modify ketchup according to season. Tomatoes can be replaced by other vegetables and aromas, to make ketchup more or less delicate, flavourful or spicy.

Ketchup is the No.1 best-selling sauce in the world and as is the case with the best products, it has changed over time. Originally from the banks of Mekong, it was spread to Europe by Chinese sailors and it landed in the USA, where it reached the peak of success thanks to industrial manufacturing. 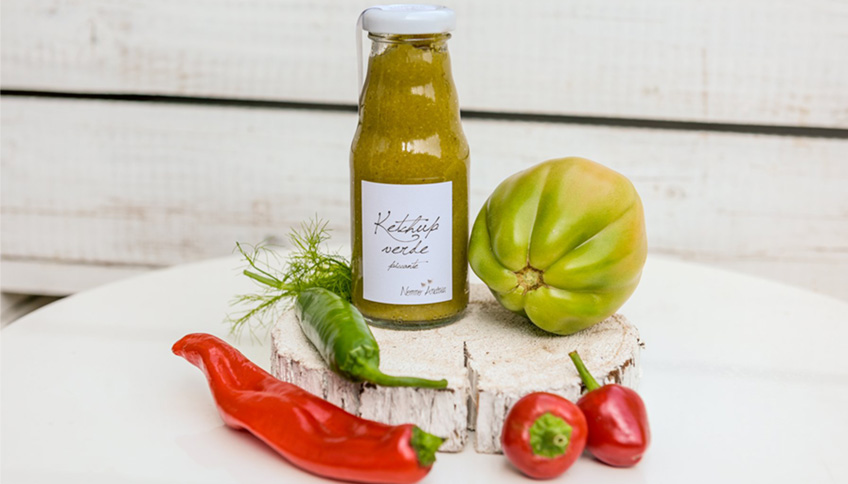 It would, however, be wrong to label it as a mass distribution product, with all the quality flaws that that entails. This is only one type of ketchup - sadly the most famous one – but there are many more, as Nonno Andrea demonstrates.