Cold cuts from Tuscany are deeply rooted in history: they were born out of the need to preserve meat, but ended up achieving exceptional quality standards. As ancient Romans would say, Mater artium necessitas (necessity is the mother of invention), and that’s exactly what Tuscan farmers did: they made a virtue out of necessity.

What are the signature features of Tuscan cold cuts?

So, which feature do they all have in common? If we take a look at the history of typical cold cuts from this region, we find a common feature. These cold cuts were all made from leftovers. There was indeed the need to, not only preserve meat, but also letting nothing go to waste.

It’s not what we would do for prosciutto ham: in this case, a refined meat cut is processed to make it last longer. Tuscan cold cuts and cured meats follow a different logic, based on the saying “we use everything but the oink”.

Therefore, the less refined meat cuts are actually used to make these cold cuts: heart, head, tongue, rind, fat – they might not be elegant pork cuts, but they have a unique taste. Believe me when I say that these “peasant” cold cuts are every bit as delicious as their “aristocratic” counterparts.

Among all cold cuts, Soprassata is perhaps the most perishable one. It must be eaten within maximum two weeks, because the meat inside the cold cut has not been aged. Its flavour is intense and its scent is aromatic.

A pig’s head, tongue, rind, but also tail and ears can be used to make Soprassata. It was historically made between the months of January and February, when pigs used to be slaughtered, but now it is luckily available all year round.

This cold cut’s manufacturing process is very special. First of all, all meat cuts are boiled together for at least three hours. By doing so, fat and cartilaginous parts melt and blend with the other meat cuts. Once they cool down, they form a mixture keeping the meat cuts together.

After being cooked, the Soprassata is seasoned: salt and pepper, lemon, parsley, garlic, sage or rosemary – each manufacturer has a secret mix that will never be revealed even under torture. Now time has come to put the Soprassata in a casing: a jute bag is used, which is closed very tight to let the jelly out. Then the Soprassata cools down.

How to identify high-quality Tuscan Soprassata. The best Soprassata has a colour ranging from deep pink to grey and a very irregular grain in which several pieces can be seen. Do not buy it if it’s too beautiful, pink, smooth and even.

Sanbudello is a very flavourful sausage with a dark colour and an intense scent. It can be either fresh or aged and it is mainly made in the Casentino area. It is listed as a “Traditional Agri-food Product” (PAT) and best embodies the ‘leftover philosophy’ usually applied to make traditional Tuscan cold cuts and cured meats.

Once again, the less refined meat cuts, such as a pig’s heart and lungs, are used to make a truly exceptional product. The meat is minced and seasoned with spices and fennel seeds and filled in natural casing.

The colour is dark, due to the high content of blood. However, do not let that fool you: the flavour is strong, but perfectly balanced. Spices and fennel make it all the more pleasant – it’s a masterpiece!

Smooth and soft, melt-in-mouth consistency, enveloping flavour and a spiced scent. Fatback is an exceptional cold cut that tastes the best when combined with hot food; that’s when the fatback slowly melts and releases its scent. The fatback is actually the layer of firm fat found on the pig’s back; even though it doesn’t sound so appealing, once you try it, you will love it.

In order to make a good fatback, prime-quality ingredients are necessary. Good-quality fatback is an actual delicacy, as much as mediocre fatback is truly disgusting. That’s why choosing manufacturers that only use Italian pigs that are reared in the best possible way and properly fed, is particularly important.

Fatback production is intertwined with the marble quarries located in the area of Carrara. The basins used to age this cold cut are actually made of marble which is not sensitive to temperature fluctuations and, hence, guarantees a perfect result. Fresh garlic is rubbed on the basin’s sides and the meat pieces are placed in between layers of a mix of salt, pepper, spices and aromas. 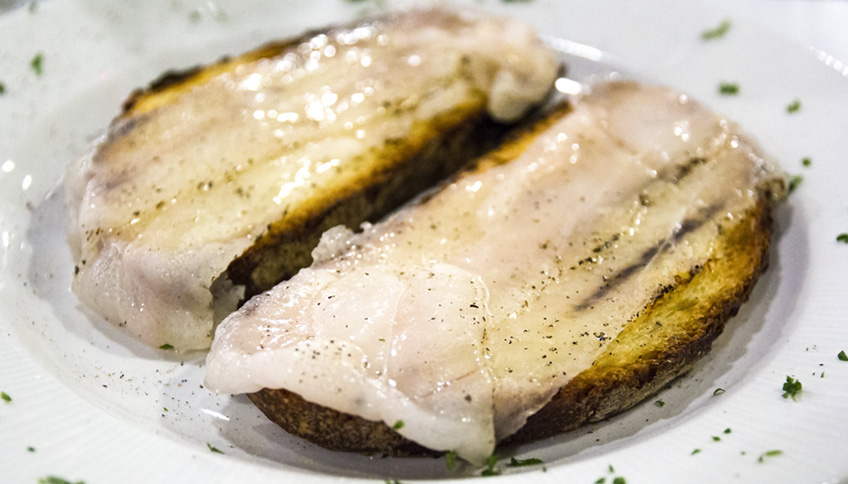 Compared to other cold cuts, Sbriciolona may seem apt for fine-dining. It is made from the lean parts of the ham and the shoulder and the fatty parts of the pork jowl and the belly fat. However, the art of making do is applied to this cold cut, too. As a matter of fact, fennel seeds, which actually give the cold cut its signature flavour, are added to the mixture to compensate for the lack of black pepper.

Pepper was rare, since it was a precious and very expensive spice. On the contrary, fennel used to sprout a little bit everywhere; once again, a virtue was made out of necessity and the low-cost option ended up becoming the trademark of one of the most delicious cold cuts from Italy.

Thanks to the fennel flavour, Sbriciolona was also useful to cover up the taste of bad wine. It is said that farmers would offer bread with Sbriciolona before letting potential customers taste their wine, so as to trick their sense of smell and convince them to make a purchase.

Here you have some of Tuscany’s traditional cold cuts, but the list goes on. What matters the most is the main ingredient, i.e., prime-quality meat from pigs that have only been reared in Italy. Then, manufacturing must be carried out by hand in compliance with the original recipes. Only by doing so can we taste properly-made, delicious, genuine cold cuts that stand as a symbol of the territory. And now, excuse me, I have to go make myself a sandwich.