THE SALAME DI VARZI, THE QUINTESSENTIAL SALAMI FROM LOMBARDY

The PDO Salame di Varzi is an excellent Italian cold cut which obtained the Protected Designation of Origin seal back in 1996. A great value of this salami lies in the fact that it is still produced in artisan cured meat factories which are almost entirely run by families. This goes to show how much this product is still respected and protected and consequently, how it managed to preserve its original genuine flavour over the course of time.

We fell in love with this salami, as we were travelling around the Lombardy area. We stopped to eat in a small restaurant, where we were served a handmade Salame di Varzi as a starter, accompanied by a glass of Bonarda (a traditional local red wine). It was love at first taste.

We especially liked the Salame di Varzi by the Thogan Porri artisan cured meat factory, located in Cecima. They founded their business back in the 60s and they have crafted a lot of salami since then, while always acting in full respect of traditional manufacturing methods: coarsely-ground meat mixture, prized pork cuts, hand-sewn natural casing.

WHERE IS SALAME DI VARZI PRODUCED?

We are in the Oltrepo Pavese area. Varzi is a small municipality plunged in a beautiful valley, in the middle of the salt route in Lombardy. This area, where the sea breeze from Liguria and the mountain wind from the Staffora valley meet, has very favourable climatic conditions. And, as we all know, many cold cuts and cured meats acquire distinctive flavours and scents depending on which climate they age in.

The PDO Salame di Varzi production area includes 15 municipalities belonging to the Oltrepo Pavese mountainous area in the province of Pavia. The Salame di Varzi is divided into three different salami types, according to aging times and diameters: Filzetta corta, cucito piccolo and torto, the smallest one. As far as the origin of the meat is concerned, PDO specifications state that pigs must be reared and slaughtered in the regions of Piedmont, Lombardy and Emilia-Romagna.

The Salame di Varzi’s story dates back to a long time ago. Lombards - a nomadic community that settled in Pavia for a while - used to rear pigs in an intensive way and had to find a way to preserve their meat. At that time, meat used to be either salted or dried, but Lombards came up with a new technique which consisted in preserving minced meat together with salt inside a casing. This way, meat lasted longer, it was easier to carry, it didn’t need to undergo any other processing and it was tastier.

In the 13th century, the Salame di Varzi became a staple on the table of the Malaspina marquises. Afterwards, merchants started to sell this salami all around Europe, maybe because its production area was located right on a very crowded trade route, the salt route, linking Pavia to Genoa.

A long time has passed from the Lombards era and now the production methods of the Salame di Varzi are way more sophisticated. But what makes its flavour so unique? Manufacturers reckon that the curing mixture and the aging period are behind the magic.

In the 50s, some local manufacturers felt the need to protect this excellent product and its gastronomic and cultural heritage. However, the Salame di Varzi supervisory consortium was only created in 1984. Since the beginning, this consortium aimed at protecting and guaranteeing this prime-quality product, promoting the Salame di Varzi all over the world, monitoring the use of the Protected Designation of Origin seal and offering technical assistance to manufacturers.

The consortium makes sure that the meat used for this salami only comes from pure Italian pork reared in certified pig holdings, located in the regions Lombardy, Piedmont and Emilia-Romagna. Pigs usually belong to the Large White breed, they are adults and weigh around 220kg. Only pigs with these particular features are chosen, because they contain a smaller water percentage and the meat has a perfect consistency for the Salame di Varzi production.

The consortium also checks which animal feeds are given to pigs in the pig holdings. As a matter of fact, pigs should only be fed with certified feeds and reared in a semi-wild state. This means that, apart from being fed with feeds containing barley, wheat, rye, oat and flaxseed meals, pigs also eat what nature gives them, since they are able to snuffle around the woods for a long time. 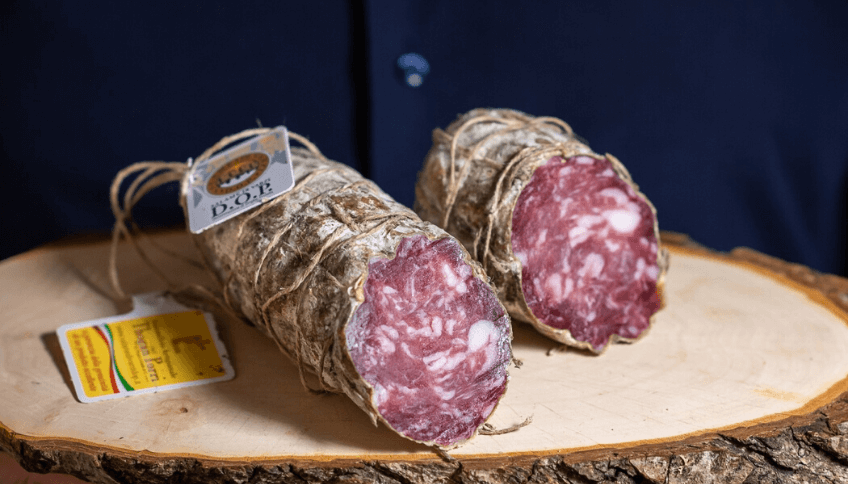 HOW IS SALAME DI VARZI MADE?

The Salame di Varzi recipe states that the meat mixture must be made with prime-quality meat of heavy pigs, which should be coarsely ground and seasoned with salt, pepper and garlic infused in wine. Only one ingredient is used to preserve the meat: salt. No artificial aromas are added.

Before buying cold cuts, we should always take a look at the percentage of fat and lean meat content: in the case of Salame di Varzi, 10kg of lean pork cuts taken from the shoulder, leg, loin, filet and neck are mixed with 3kg of fat parts, taken from the pork jowl, central part of the pork haunch and fatback. As a matter of fact, the Salame di Varzi is made from pork cuts obtained from an entire half-carcase.

Then, as we mentioned above, the mixture is filled in natural casing and the salami starts aging; during this step, it acquires the right aromatic balance and an ideal consistency. Before being placed in the cellar, the salami is left to dry for a week.

The salami is then placed in the cellar to age; the cellar’s climate blends with the salty air of the Ligurian Sea and the air of the mountains, which allows the salami to develop unique flavours. The Salame di Varzi ages for at least three months - minimum 100 days. However, expert butchers believe that six months is the perfect aging time for this salami.

A SWEET AND FLAVOURFUL SALAMI

The slicing of this salami follows a somewhat curious tradition. It should be sliced in a diagonal way in order to obtain oval and thick slices which let you fully savour all its nuances.

Salame di Varzi has spiced scents which are more or less intense depending on the location and aging time, a slight hint of bread crust and grassy aromas. The flavour is delicate, sweet and distinctive and the garlic, which is added to the mixture, is not overwhelming at all.

The final result is a handmade salami with a cylindrical shape, which is tender and with a beautiful bright red colour. The inner part should drip upon cutting, meaning that the fat used in the salami mixture is of good quality and slightly melts at room temperature.