Parma dry-cured ham: the story behind this delicacy

Parma has now become a synonym of prosciutto ham. Parma ham, which obtained the Protected Designation of Origin in 1996, is a true masterpiece. And the king of hams deserves a worthy trademark, like the five-pointed duke’s crown.

The Product specification sets out the place of origin as well as every production steps regarding Parma ham. The geographical place of origin is very small: it stretches five km south of Via Aemilia reaching an altitude of 900 m above sea level. The Enza stream to the East and the Stirone stream to the West are natural borders that may not be crossed.

Parma ham is only made within this area, because this tiny enclosure has a unique microclimate which is ideal to let Parma ham age in a natural way.

How is dry-cured Parma ham made? Who came up with it? Let’s take a look at Parma ham, starting from its history.

Let’s go back to the Roman era, when Parma was the heart of the Cisalpine Gaul province. Back in the days, swine farming and the manufacture of hams were already practiced in this territory.

Cato the Censor (234 BC - 149 BC) explained in its work “De Agri Cultura” how hams used to be made. It is surprising to see how production techniques are still more or less the same nowadays: a selection of meat, salt and wind - that’s it.

Varro also analysed the farming and meat processing techniques in his work “De Re Rustica”. He drew the following conclusion: “Suillum pecus donatum ab natura dicunt epulandum”, which means “people say that pigs were given to us by nature to enjoy life” - that sums up pretty well how delicious this ham truly is.

Columella (4 AD - 70 AD) also described in his work “De Re Rustica” how this ham is made and suggests to avoid giving water to the pigs the day before the slaughtering, to obtain a firmer meat.

Baldassarre Pisanelli - a renowned doctor from Bologna - talks about dry-cured ham in his Essay on the nature of food and drinks (Trattato della natura de’ cibi et del bere, 1587) and we know that dry-cured ham was eaten at the Colonna’s wedding in 1589.

In the middle of the 17th century, Carlo Nascia - Ranuccio Farnese’s cook - used it in many of his recipes which were then collected in his book “Li Quatro Banchetti”.

In more recent times, the Parma Ham Consortium was founded in 1963 with the aim of promoting the product, protecting the brand, overseeing law provisions and offering assistance to partner companies.

Parma ham is really one of a kind. Let’s see why.

Why is it so special?

Let’s start by talking about pigs: they only belong to the Large White Landrance and Duroc pig breeds. They are born and reared in 10 regions in Central-Northern Italy; they must be at least 9 months old and they must weigh minimum 160kg. Fresh legs are left to rest for 24 hours in special cooling cellars and they are then trimmed.

Trimming is a fundamental step which helps getting rid of the fat and rind and gives the ham its signature round shape.

The next step is salting the Parma ham, by employing a particular technique: the rind is treated with moist salt and the lean parts are covered with dry salt.

It’s now time to let the pork legs rest in cellars with a 75% humidity, at a temperature between 1 and 5°C for 60 to 80 days; a frequent air renewal is necessary to prevent the meat from drying out.

The pork legs are then washed with lukewarm water and dried and are then hung from specific ladders. They must dry slowly and gradually; that’s why the big rooms in which the hams rest are fitted with huge windows that, depending on the climate and on the inside and outside humidity levels, are opened or closed.

Smearing consists in applying pork lard on those portions of the ham that are not covered by fat, thus softening the muscular layers and preventing the meat from drying out.

The aging period begins only seven months after processing has started. The place of origin set in the product specification has unique environmental conditions which give the Parma ham its signature scent.

Hams regularly undergo 'olfactory' tests: the ham is pierced in several areas with a big needle made out of horse bone and then the needle is smelled to check whether everything is going well.

Finally, the fire-branding. At least 12 months have passed since the beginning of the process. The five-pointed crown guarantees that each ham has been made the traditional way. 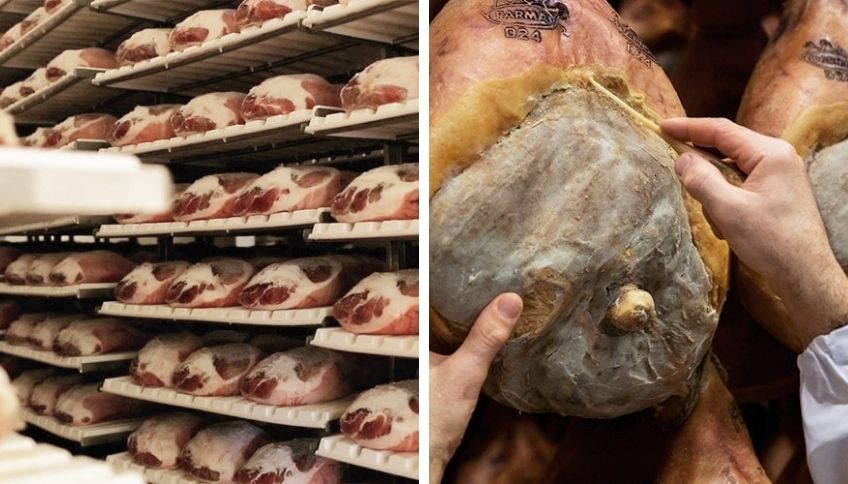 Parma ham is completely natural: no chemicals, preservatives or additives - only meat, salt, air and patience.

This ham is truly special and has a unique aroma. The flavour is refined but intense, sweet, delicate, but long-lasting - in a nutshell, a unique and unmistakable taste.

A passion for excellence has always characterised the evolution of this company, since Enrico Devodier opened his ham factory back in the 50s. Wisdom is passed down from generation to generation and the company still makes excellent products born out of care and dedication.

Organic farming with no antibiotics guaranteeing animal welfare - that’s what we mean by virtuous production chain.

It is remarkable to see how such an exceptional product, like dry-cured Parma ham, comes from such a simple raw material like pork. We can only thank all those manufacturers that strive every day to keep the tradition of this exceptional product alive.