Surface mould-ripened cheeses and washed-rind cheeses: how do they differ from each other?

The world of Italian cheeses is full of excellent products embodying many different traditions. Some cheeses are so different that you’d never believe that they come from the same family.

Washed-rind cheeses, also called smear-ripened cheeses, are cheeses whose rind is regularly treated with a water and salt brine. This treatment allows the development of a particular halophilic flora, meaning salt-lover flora, which forms a slightly sticky, thin coating made of thousands of microorganisms.

This water and salt brine that is used to ‘wash’ the cheese is the key element of the whole production process. It fosters the growth of a surface flora, but it also entails a higher amount of salt in the cheese paste.

Washing the cheese with the salt brine is responsible for over 50% of the salt contained in the cheese. It is, therefore, a fundamental step that also affects the flavour of the cheese.

Furthermore, by washing the cheese, the humidity levels promoting the settlement and propagation of some surface floras rather than others are maintained. That means that thanks to the salt, good bacteria are kept, while the others are gotten rid of.

Soft cloths or brushes may be used for the treatment, while the frequency of this washing process depends on the cheese age (a young cheese must be treated more often that an aged cheese), and on the humidity levels that are found in the aging rooms.

Turning the cheese over is also important: cheese wheels must be regularly flipped to ensure that the whole heel of the cheese absorbs the right amount of brine.

Fontina and Taleggio are some of the most famous washed-rind cheeses. Fontina cheese, which has obtained the PDO label in 1995, is a semi-hard, fatty cheese made from raw milk, which ages for at least 3 months in natural caves. Cheese wheels are treated with a brush for the first 30 days and then turned over on spruce wood tables.

Taleggio cheese, which has obtained the PDO label in 1996, has a soft paste, a rectangular shape and no eyes or very fine eyes. It ages in cold and very humid rooms and it is ready for consumption after 40 days. The maturing process works from the outside in, meaning that the cheese paste is creamier in the layer under the rind and crumblier in the middle of the cheese wheel.

The wide variety of Italian cheeses stems from many different and precious traditions and handmade techniques. The technique of surface mould-ripened cheeses has been greatly influenced by the French cheesemaking tradition.

As a matter of fact, the three most famous cheeses with a surface mould actually come from France: Brie, Camembert and Caprice des Dieux. They all have a soft and creamy – almost melt-in-mouth – cheese paste and a fluffy rind, indicating that a healthy and strong colony of Penicillium Candidum mould has settled there.

Noble moulds live on the surface, forming a soft layer that is as white as snow.

The mould penetrates with its roots to the inner part of the cheese wheel, lending that unique flavour to the cheese, which is reminiscent of the scent of mushrooms and butter, defending the cheese from ‘evil’ microorganisms and keeping the humidity levels perfectly balanced.

We must admit that our French cousins gave us a great gift. We on our part managed to make this genius technique our own and, as a consequence, truly incredible cheeses saw the light of day.

Which are our favourites? The cheeses of Andrea, the cheese alchemist. De’ Magi’s products are handmade, they age in stone caves and they are born out of the combination of natural techniques and cutting-edge technologies. 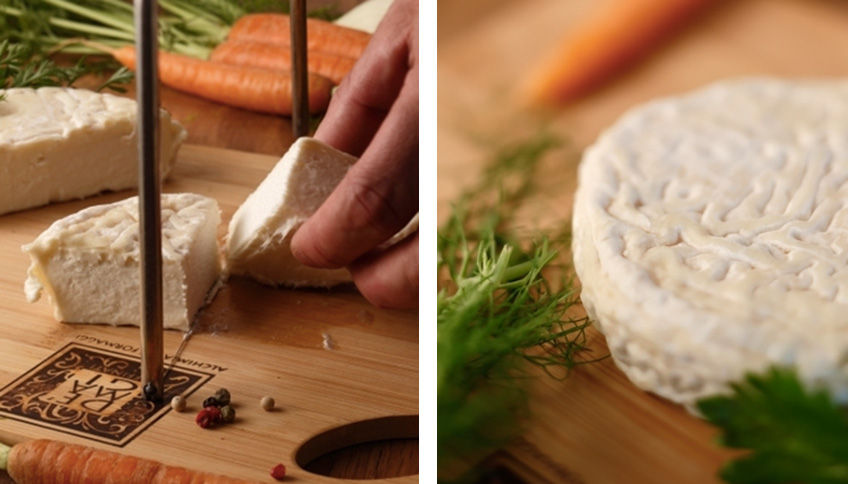 Re, Regina, Alfiere and many more cheeses have an exceptional flavour that is enveloped by a soft, velvety rind.

We shouldn’t need to say it, but it’s best to clarify any doubt. The rind should be eaten, too! That’s where the unique flavour of these cheeses comes from.

Italian cheeses are a constant source of amazement. Our cheesemaking tradition is so ancient and rich and has created endless, unique and incredible cheeses. And washed-rind cheeses and surface mould-ripened cheeses are some exquisite examples.