The Italian cheese landscape is packed with flavour, story and tradition. Handmade processing carried out by expert cheese makers is combined with prime raw materials, resulting in simply exceptional products.

Cheeses made from ewe’s milk, in particular, are pillars of the Italian cheese-making tradition. As a matter of fact, Pecorino cheese has been gaining renown thanks to its unique and unmistakable flavour.

Italy is the fifth largest Pecorino cheese producer in the world, after Greece, Spain, Portugal and France. More than 7 million heads of sheep are reared, accounting for almost 80 thousand tons of cheese.

Exports are also constantly increasing: a staggering + 23% since 2015. Which country loves Italian Pecorino cheese the most? The USA which alone account for 70% of exports.

Where did Pecorino cheese originate?

The Pecorino cheese production area in Italy is well defined. From the Po plain up, we mainly find cow’s cheese, as well as from the region Lazio down, where the curd stretching technique has resulted in the production of actual works of art (such as Caciocavallo and Provola cheese). What about in the middle? Between Tuscany and Lazio, we can find the “land of Pecorino cheese”, stretching also beyond the Tyrrhenian Sea and enclosing the whole region of Sardinia.

What’s so special about this area? And why are the best Pecorino cheeses made here? Compared to Northern Italy with its large grazing grounds and pastures, this area has less pastures, less cows, but many more heads of sheep.

This is the land of transhumance. Flocks of sheep move between the hills and coastlines along the drovers’ roads. Sheep, unlike cows, live outside most of the time, on natural pastures and also on steep lands with poor production capacity.

Besides, these are marginal lands, where hardly any other activity can be carried out. Sicily’s inland is the perfect example of this: dry and rugged land for both humans and cultivations, but not for sheep. Sheep rearing has become a tradition in these territories and in some cases, it has also prevented depopulation.

A comparison of Sardinia and Tuscany

Sardinia is the Italian region with the highest number of sheep, with almost 3 million head of sheep living on the island. Tuscany actually ranks only fourth, after Sicily and Lazio, with more than 500,000 heads of sheep. One point for Sardinia.

As far as the number of Traditional Agrofood Product (PAT) and PDO labels goes, Tuscany beats Sardinia. Without taking into account the PDO Pecorino Romano which is actually made in both regions, we have to mention, among all Tuscan delicacies, the PAT Pecorino di Pienza, the PDO Pecorino Toscano and the PDO Pecorino delle Balze Volterrane. In Sardinia, PDO Pecorino Sardo and PDO Fiore Sardo stand out.

Concerning the history of Pecorino cheese, both regions have an over thousand-year-old tradition. Tuscan Pecorino was actually “invented” by Etruscans who also developed a cheese-making technique involving the use of vegetable rennets. In Sardinia, however, the Nuragic civilisation already practised sheep farming. 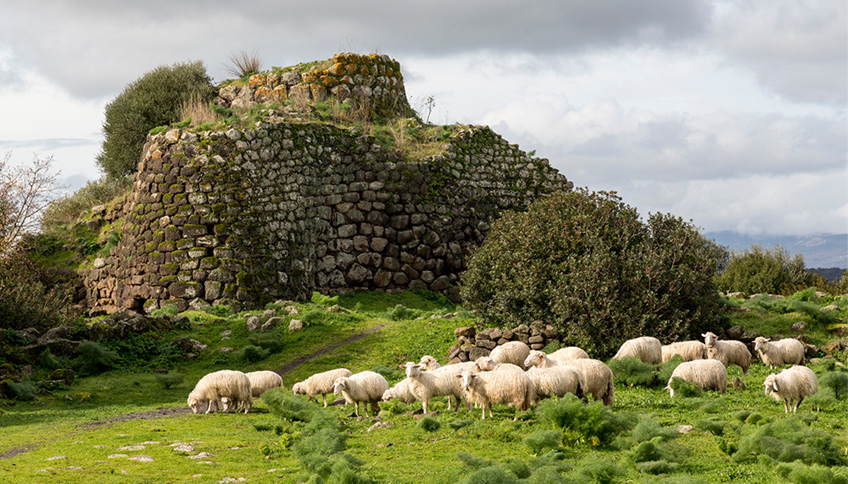 And what about flavour? It is impossible, and also useless, to compare them. They are two delicacies among all Italian cheeses that are equally valid and refined. It would be fool to pick sides; why not enjoying them both? If we want to define the flavour of these cheeses, we can only say that both the Tuscan Pecorino cheese and the Sardinian Pecorino cheese have a unique, intense, long-lasting and unforgettable flavour.

Let’s not forget about the fundamental role that aging plays: the longer a cheese ages, the more intense and long lasting the flavour is. The consistency changes, too, of course. Fresh Pecorino cheeses are soft, almost buttery. They have a bright colour, an elastic paste and a delicate aroma. On the contrary, an aged Pecorino cheese is almost crumbly with a straw yellow hard paste.

Depending on the aging and on the flavour of each cheese slice, we can have fun finding the perfect flavour combination. In the spring time in Tuscany, broad beans and Pecorino cheese are a must; in Sardinia, the ancient Seadas dessert with a filling of Pecorino cheese is the perfect mid-afternoon snack. Pecorino sardo pairs the best with Culurgiones filled pasta; to enhance the flavour of Tuscan pecorino, we suggest pairing it with a selection of honey.

Pecorino is a symbol of our food culture, as well as one of Italy’s oldest cheeses. Tuscany and Sardinia treasure and protect these cheeses with an exceptional flavour. Why only choosing once, when you can have both?